The tricky thing is: to awaken means to die first. If you are not prepared to die and are obsessed with your own survival don’t expect others to let go of their ideas about security and freedom.

My friend told me: “When the systems crash we need people like you. Because we will not fall back into the middle ages. We will have a developed society without guidance. We know what mechanisms brought us down. New forms of leadership will emerge. We need the warriors you are talking about. They have to show us a new paradigm for living. They have to show us how to live from the heart. That’s why we need you to go on your journey and that’s why we need your book.” You are not convinced? Let me illustrate it once again. Michael Franti performed on Occupy Amsterdam. He gave a free performance to the protesters. In the video below you see an interview with him where he voices to problems beautifully and eloquently. A true warrior he is, a man who united and not divides. Listen to him when he sings. And then pay special attention to the cheering of the protestors when the song is over. They are no different than the bankers that they react against. Let’s appreciate the complexity of the issues at hand. We must be willing to look at ourselves first before we judge the other. The sooner the better. Now. 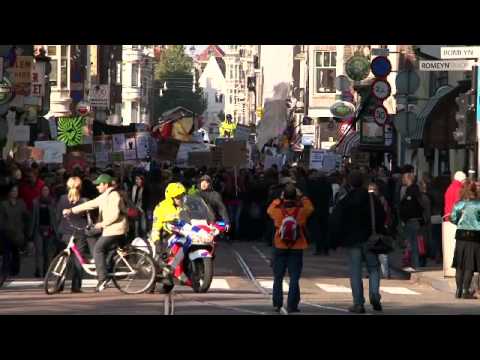