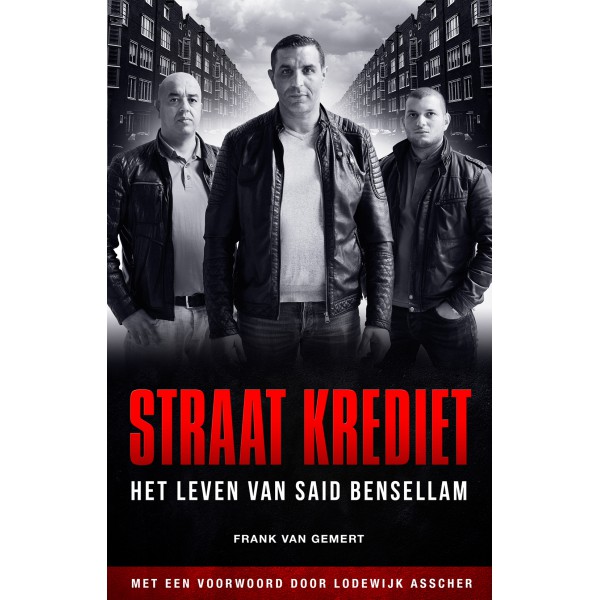 Before me, on my kitchen table, is a brand new book with the manly title ‘Straatkrediet’ which is the literal translation of the term ‘street cred’. It is the biography of Said Bensellam, a guy my age that I had coffee with yesterday. He brought me a signed copy of his book, written by the Dutch criminologist Frank van Gemert and published very recently. I read it from cover to cover from yesterday afternoon till 11 o’clock this morning. Needless to say I recommend you buying it too (it is in Dutch though).

Halfway the 80s Said was a Moroccan teenager that was on the verge of sliding down the slope and falling into criminal life. He had dropped out of high school were he was bullied for his chubbiness and his protruding ears. He never admitted to his hard working immigrant father he wasn’t going to school anymore, which forced him to lie and spend his days hanging on the streets.

One day the recent European Kick Boxing Champion Rick van de Vathorst passes by on his Harley. He shouts ‘hey fatty, you should come train with us’. Even though he was called by his unpleasant nickname it was clear that it was meant as an invitation, not an insult. And since it came from the champion it was quite an honorable invitation as well. Said feels shy but tempted. When he visits the gym he is received with typical Amsterdam working class warmth, something he has never felt before. He would love to train but realizes he can’t afford the monthly contribution. But the family who runs the gym offers him an arrangement: if he does a couple of hours of cleaning and vacuuming every week he can train for free.

Said fully embraces the opportunity that is given to him. He trains hard, becomes disciplined, loses his body fat, makes new friends and last but not least: discovers he has talent. A bullied kid, a high school drop-out discovers he excels in a sport that is respected in the violent street culture that surrounds him and finds a place where he is appreciated and welcome.

Martial arts champions have always been in high demand as bouncers. Not only do they hate to lose any fight, the public also knows their name, face and reputation. Rick is also a bouncer and when Said is 18 years old he is introduced into this world.

Long but fascinating story short: Said, the chubby and bullied teenager with no self esteem, becomes one of the most respected bouncers in Amsterdam, working the most difficult doors for 17 years: autonomous, unbribeable and fearless, with an endless list of feats of courage and street justice.

What I found most powerful about Said’s story was that he always managed to remain autonomous. He never fell for the temptations of fast money. All the gangsters in the country wanted him as a friend and he was still young and – one would assume – relatively easy to influence. He wasn’t. He saw very clearly how people around him, sometimes people he loved, were consumed and spit out by criminals. He made sure he kept a distance. It was also this distance that gave him the ability to see the emptiness of his world in time: he realized that all this ‘respect’ from gangsters and bouncers didn’t mean much in the real world and came at a high toll.

His life takes another unexpected and fascinating turn. Burnt out from being a bouncer he looks for new purpose. Then he hears from a niece in Morocco that needs expensive surgery. Eager to divert his attention he starts collecting money in the Moroccan community for the surgery of the child. The operation is cheaper than expected and they have enough money to have five more children operated. The former head bouncer becomes a social worker. He brings his bouncer attitude with him, which makes that he confronts conflicts head on and is able to deescalate explosive situations. The neighbourhood where he grew up is notorious for problems with Moroccan youth. Said is able to solve problems that have been unsolvable by authorities for a long time. He is noticed for his good work and now grows a reputation in the world of politicians and social workers. He received the Amsterdammer Of The Year Award in 2006.

For me it was a humbling, honorable and inspiring meeting. We discovered that we are only 4 weeks apart (I am older). That means that our moms were pregnant at the same time. In some way we didn’t live such different lives: I visited almost all the places where he worked the door (although they weren’t my favorites). Turned out we know many of the same people. But in other ways our lives were very different. Me: Dutch, graduated from university, grew up in wealthy neighborhood. Said: Morroccan, no diplomas, grew up in poor and violent neighborhood. Today: two men who came a long way, who try hard to to something good with their lives by helping others.

That we met was no coincidence. I read an article about him in the newspaper some time ago. The title was something like ‘Warrior for a good cause’. I tore it out and put it in my pocket. I forgot about it and found it again. I thought of throwing it away because who am I to think he would want to meet with me? But then a surge of courage went through me and I wrote him a short message on social media. And I received a very friendly and humble message back saying that he was inspired by my website and interested to learn about my work.

I am not sure where this connection will take us. But Said asked me if we could hit the gym together next week because he feels a bit out of shape. Can you imagine how honored I feel? I am looking forward to spend time with such a courageous and like-minded soul. If the stars are favorable only good things can come out of this.