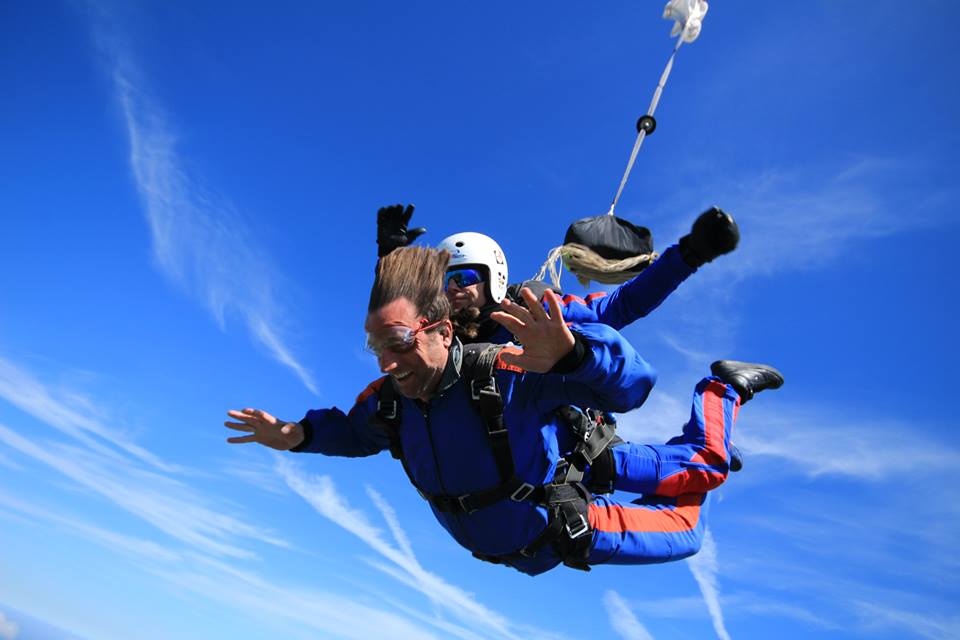 More on Rebirth. I promised that to you and myself.

I wanted to tell you about the spectacular finale but my post took a left turn somewhere and something else came out of my fingers. These things happen when I allow my heart to speak and my fingers catch the words which is what I do when I sit down and write these posts. I like it but it can be a bit confusing, also for myself. But the upside is freedom. Also I trust that my heart speaks of things that I least I myself need to heart but perhaps other people too. So I try to get out of the way as much as possible. I recommend you to try it too.

But I am getting side-tracked once again. Back to the finale of the 100 Day Warrior. The accompanying pic kind of gave it away: we jumped out of an airplane! Did you hear that? We. Jumped. Out. Of. An. Airplane. I can’t imagine doing anything more counter-intuitive than that.

I never intended to have a parachute jump in my program. Actually, the idea alone has always been very frightening to me. To be 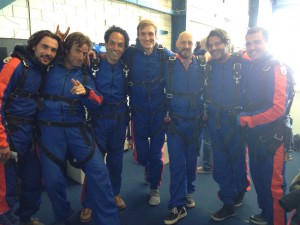 honest the idea of writing about the experience of feeling that fear makes my palms sweat. But somehow this event snuck into my program, quite likely because it was lingering somewhere in my own subconscious. During the 100 Day Warrior I I had a very stressful dream about going on a parachute jump and having to organize everything last minute. I was relieved to find out it was a dream but when I shared it with my participants they were disappointed it was only a dream. Due to bad weather the jump was canceled though. But this time my Inner Coward was less fortunate.

The idea is that the Warriors come up with a finale of some sorts when we approach the end of the 100 days. I want it not to be my idea but our idea. Of course I can give suggestions and I thought that a sweat lodge was quite appropriate too: very spiritual, comes from indigenous cultures that bred warriors too and symbolizes rebirth. But the group has no doubts: a parachute jump was our way to go.

Rebirth is a central theme on all spiritual traditions and in many cultures initiation is a very important aspect of life. Initiations are rites of passages marking entrance or acceptance into a group or tribe, it can signify transformation where the initiates are reborn after defying some sort of ritual death, therefore more ready than before to conquest the real fear of death. You can find signs and symbolic references of rebirth in many tales, legends and myths. In Snow White there is a poisoning, a long sleep and an awakening, in Little Red Riding Hood the grand mother is reborn by coming out of the belly of the wolf, Jonah comes out of the whale and Jesus resurrects from death. During the 100 Day Warrior we have collectively chosen to face a modern death by jumping out of an airplane.

The difference between a tailor made adrenaline rush and a transformative ritual is that we add awareness to the equation. We knew what we were doing and why we were doing it.

Our weekly morning meditation session was beautiful. Some of us were more nervous than others though. Roland, Bas and I were quite nervous, Rik and Huub were pretty cool about it. I asked the Warriors to write a letter, about what they wanted to leave behind and how they wanted to come back to Amsterdam. Then we jumped in our cars and drove to Teuge, where the airport was.

The plane took off and.. everything changed! That plane went steep into the sky. We were hooked onto our jumpmasters. Shit got 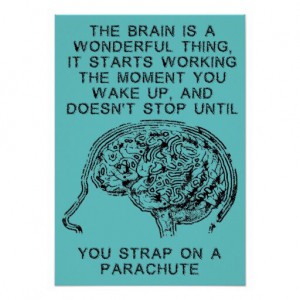 serious. I feel a mixture of fear, focus and sweaty palms. We went to 10.000 feet. And I will NEVER forget the moment that someone OPENED THE DOOR and PEOPLE STARTED JUMPING OUT OF THE AIRPLANE!! That was the most insane moment ever.

I had told my jumpmaster because I had lead the course I felt obliged to jump first. Therefore we had entered the plane last and now I was the first one to jump. My feet were outside the plane, I had to lean my head back on the shoulder of the jumpmaster. Then he lets go and we fall. With 200 kilometers per hour we are falling. I have no words to describe the feeling. After 30 seconds I felt a sudden tug: the parachute has opened. It seems that I am not going to die today. I hang completely paralyzed in my harness. The world has gone silent. I can hear my jumpmaster giving instructions for the landing. We land safely. For minutes I can only lie in the grass repeating the words ‘holy shit’ over and over again. I am grinning, euphoric and stunned at the same time. I had just done something that my mind just can’t grasp.

One by one my fellow warriors are falling out of the sky, landing safely. We are all euphoric, ecstatic. We all can’t stop grinning.

NOTE TO SELF: A parachute jump is hands down the best way to create an ultimate climax in a course.

This day was one of the most memorable days of my life. Not only because I faced an ultimate personal fear but also because I saw all transformative insights I had wished for my participants reflected back. We truly came out of that day and out of our journey reborn: more whole and complete than we had ever been before. We did it again. Mission accomplished.