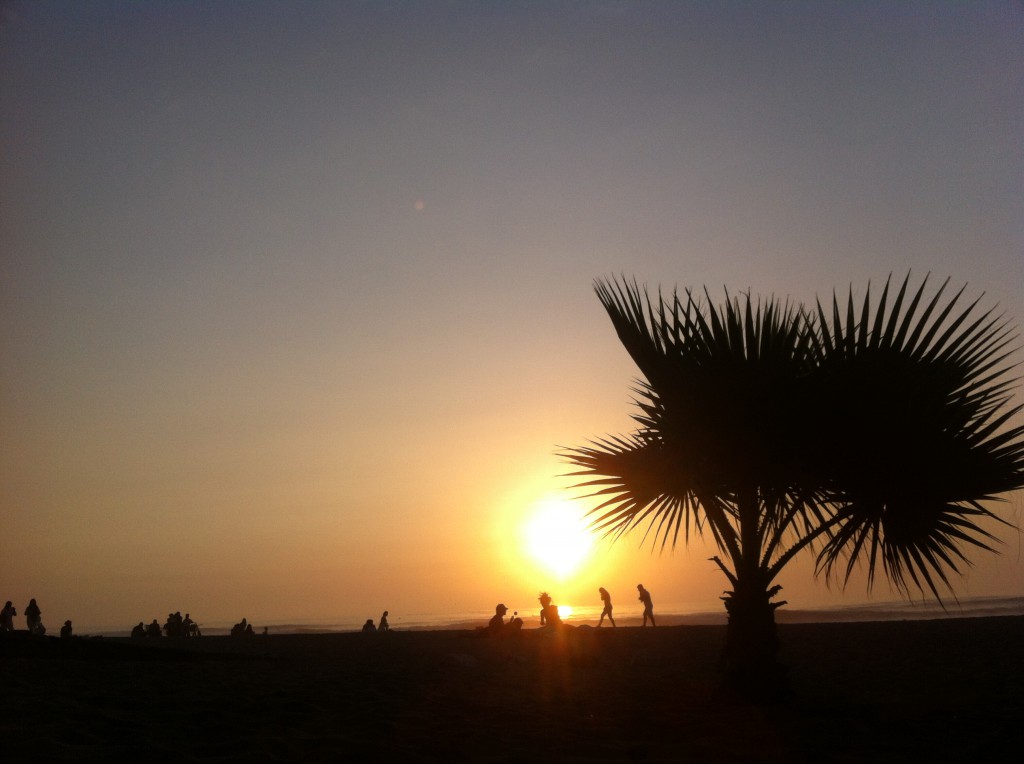 I am in Peru! Last night we crossed the border with Ecuador. It is amazing how different this country is. Although I only walked around for half an hour twice today, I had soup in Piriu and took the bus to Chiclayo where I had a sandwich before I jumped in the next bus to Trujillo in which I am now, the atmosphere, the climate and the surroundings are completely different. The food is better, it looks very deserty outside (Ecuador was very mountainy), traffic is louder and more impatient and it is hotter.

I feel quite fit and rested. I wonder how many hours I was effectively asleep. When I sleep in a bus or a plane I often have the feeling that I am never really asleep because of the physical discomfort. Trying to sleep semi-upright screws up the blood circulation; my hands and feet start to hurt after a while and not much that I can do about it. But in bus #2 of today I had a refreshing nap and now I am working in bus #3. I have spent the night traveling and the day working. So although I have been in a bus for a long time, I am not wasting my time. To be honest: the fact that I have no wifi in the bus and that I have to make the most of the battery life of my laptop makes me a lot more efficient. I like working in the bus.

If I am not mistaken I will end up at the beach today. I did not swim since Australia! Back then I felt I had seen enough pretty beaches for a while and I liked the forest and the desert of California but by now I am really looking forward to a swim in the ocean! I will be a new thing: I never swam in the South Pacific Ocean if I am not mistaken. Hopefully I can tick that ocean off this afternoon and then I have had them all, I think.

Yesterday I received a link from The Good Men Project. They published my posts about Psycho Bitches From Hell on their site and they both ended in the Top Ten of most read posts in January. I came in at #1 and #5! If I remember correctly more than 13.000 people read “How to Deal With Psycho Bitches From Hell”. That is a fascinating idea. And the same miracle that happened in Thailand happened again: during the month in Cali where I believed I was not doing much valuable for others (or myself) I unexpectedly hit the bull’s eye. Feels like finding out you’ve hit a homerun when you were swinging the bat with your eyes closed. It is so strange that I hardly ever feel successful at the same moment that I seem to be successful. And although I don’t feel direct effects of such posts on my daily life, they live their own lives and keep helping at least some people every day. These posts are read around the clock. This means that even when I am sleeping I can be useful to others. That is a nice idea too.

I will stop writing for a while because I have hardly any battery left. I hope to take a swim and some pictures before it gets dark tonight. Then I will write the paragraph below with my final thought of today. No idea what it will be yet.

It’s a couple of hours later and did take a swim in the ocean (cold water!), meditated on the beach (nice!), saw my first Peruvian sunset here in Huanchaco (check the pic) and had some food (better than in Colombia or Ecuador). I feel peaceful and grateful. Tomorrow I will treat myself on a whole day of meditation and reading I decided.

The course my life has taken feels simultaneously inevitable and unpredictable. I have a distinct feeling that I am moving in a certain direction and that this direction it is the good direction. But what will come out and how the goodness of the taken direction will manifest: I have no clue. At the moment I am more curious than scared. I can only do my best and that’s what I will do.

PS: If you are interested in attending my workshops in New York or would like to host one (in the second week of March) email me. I will send you details. You can make appointments for private sessions too.