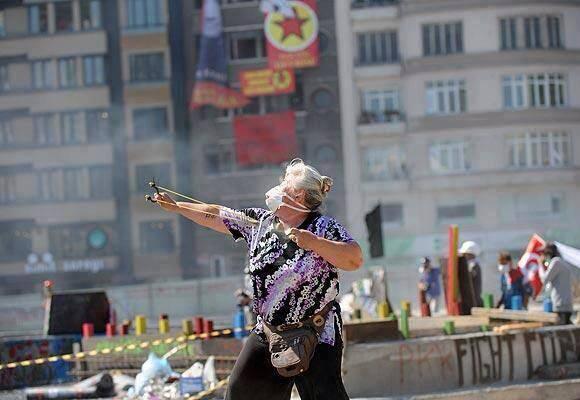 I feel I should write about Istanbul and Taksim Square again because I think that what I wrote before should be balanced. In case there is anybody who read my posts and feels all cheered up about the things that are happening in Turkey: it is not a paradise anymore. The riot police cracked down hard since Monday. The amount of tear gas used is off the scale. Many peaceful protesters have been injured (600-700 on Tuesday alone) and lawyers who defended protesters have been arrested (causing now the protest of thousands of lawyers): prime minister Erdogan and his fellow politicians are behaving in a disgusting way and deceitful way. It is awful.

I know people on that square, at least a handful of them. I care about their well-being. I have been receiving personal messages sent directly from the square and I have been following the news quite closely. It is for the first time that I actually find Twitter useful. The Turkish protests have been widely ignored by the Turkish media so the protesters rely heavily on Facebook and Twitter to get the truth out. By witnessing their desperate efforts and blood chilling cries for help today (messages like: “Please world, listen to us! Our government is gassing us! We need help!”) and seeing what actually makes it to Dutch newspapers is embarrassing and concerning: a discrepancy that is too big. I think the Dutch media do a poor job. The BBC and The Guardian are doing a much better job, thank God. They feature a continuous flow of eyewitness reports. What I read there confirms what I hear from my friends.

I write about this because I have learned from my friends and other Turkish readers how important it is for them to know that people support them in any way possible. It is a bit hard to imagine that writing a post from some remote and laid back corner of Asia matters to people who are gasping for air, being beaten, shot at and chased. But on the other hand: if I would be in such a position I would also hope that at least my cause would be heard and supported.

I am interested in the realization of our potential as human beings. You could say that I am a student of the human condition. I am convinced that every human being possesses basic goodness, hence the name of my company. I have discovered the truth of the age-old adage that I therefore live by: “I am a human being, therefore nothing that is human is alien to me”. I know that I possess not just some bad and impure characteristics: I have all of them. And having all that said: the behavior of prime minister Erdogan is revolting to me. I feel physical disgust when I think of how he thinks and acts. I really don’t want to write about that man and that what he symbolizes to me. To write insightful things I have to identify with him, you see. And I just don’t want to go there.

Much rather I ignore the negativity. But that would be denial. And I don’t want to forget about my friends when they are in dire straits because it is more convenient for me and more up my sleeve to write about uplifting stuff. So here goes.

Erdogan accuses the protesters of being looters, filth, marginal groups and terrorists. To accuse the youth of your country, the sons and daughters of your nation, is not just appalling, it is not even close to the truth. It is the opposite. The people who have gathered there are the Goddamn flower of the nation! (Sorry God, for cursing). These are the bravest, most courageous, most creative and most kind-hearted people Turkey has brought forth. Instead of being embraced they are scapegoated by their prime minister! He sends the riot police the beat their non-violent and unarmed asses down! By spreading his lies through the media he controls his poorly informed and remotely living electorate probably even beliefs he has a point. So he blatantly lies to justify blatantly immoral violence against innocent people and blatantly deludes his own following into believing his lies.

On Sunday Erdogan said he would invite the protesters for a talk on Wednesday. On Monday morning the riot police comes and starts 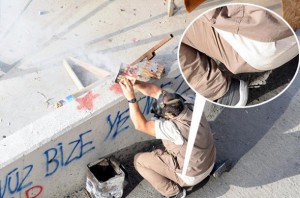 gassing and attacking the crowd. Oh, except for the handful of 50 year old bulky men in kaki trousers and safety boots who are throwing Molotov cocktails at the police, conveniently in front of the cameras of the Turkish media who now surprisingly are all at the scene at 6 am. Protesters who try to stop the provocators are arrested. What does this mean? It means that the police know that the protesters are peaceful and they make an embarrassingly ridiculous attempt to stage ‘protester violence’ by giving a couple of undercover agents the task to throw Molotov cocktails at their colleagues to create an excuse to use force against the protesters. They know they will look and feel like disgraceful and dishonorable cowards when they start beating and gassing innocent people for no reason. So they falsify a reason.

These examples are merely an illustration of what seems to be the standard procedure of operating of the Turkish government. There is a lot more injustice. A lot.

I feel for the protesters. How betrayed and abused must they feel. I feel ashamed when I see press photos of the undercover agents preparing their Molotov cocktails in Dutch and German newspapers being described as ‘protesters on Taksim Square’. I feel so indignant that I have a hard time breathing.

Please read these posts if you give a fuck:

“What do #occupygezi Protesters Want? My Observations from Gezi Park” by Zeynep Tufecki, student and blogger, interviewing in the park almost around the clock.

“I can never trust the Turkish Police and government again” by Can Oz, owner of the biggest literary publishing house in Turkey. “For years I did not speak up enough, but I cannot live a dishonorable life any longer” says Mr. Oz.

“What you can do to stop the abuse of protesters in Turkey” by Howard Eissenstat, serving as country specialist on turkey for Amnesty International.

“Erdogan’s reaction to Turkey protests reveals ominous Putin parallels” by Luke Harding from The Guardian. Describes with great British sarcasm the actions of the agents provocateurs and more.

If you are neutral in situations of injustice, you have chosen the side of the oppressor.

The only reason I write this post is because it is the best I can do. I am not neutral. I want the protestors in Turkey to know that I care. They are on my mind constantly and I follow them carefully. I wish them courage, wisdom and stamina. May justice prevail.