Today I visited the War Remnants Musuem in Ho Chi Minh City, Vietnam. It is a Vietnamese perspective on the war and the suffering caused by the American agressor. That means that the atrocities of the Vietcong are conveniently left out of the picture and mustn’t have been very pretty either. But boy, did the Americans do horrible things.

Two things strike me in particular. How in earth could the Vietnamese win this war? The amount of high tech weapons, tanks, guns, fighter jets and chemicals that the US has used against this dead poor people is astounding. How did they do it? And what is underneath these tiny, skinny, busy, mostly cheerful people? The second thing is hearing and seeing about the impact of the use of chemical weapons and the scale of which they were used by the US. When I was walking through the exhibition I remembered something. Wasn’t Saddam Hussein condemned by President Bush for gassing 2 villages with rebellious Kurds? How many days would it have taken the Iraqi’s to commit this horrible crime? 1? 2? 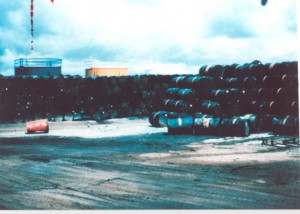 Wikipedia on Agent Orange: During the Vietnam War, between 1962 and 1971, the United States military sprayed nearly 20,000,000 US gallons (75,700,000 l) of chemical herbicides and defoliants in Vietnam, eastern Laos and parts of Cambodia, as part of the aerial defoliation program known as Operation Ranch Hand. The goal was to defoliate rural/forested land, depriving guerrillas of food and cover and clearing sensitive areas such as around base perimeters. The program was also a part of a general policy of forced draft urbanization, which aimed to destroy the ability of peasants to support themselves in the countryside, forcing them to flee to the U.S. dominated cities, depriving the guerrillas of their rural support base.

A government that “destroys the ability of peasants to support themselves in the countryside” by happily spraying truck loads and truck loads full of TCDD, for thousands of days in a row. TCDD is a dioxin that has been described as “perhaps the most toxic molecule ever synthesized by man”: the magnitude of the cynism and cruelty of this crime against humanity goes far beyond comprehension. This is the same country that successfully convinced the world or the monstrosity of the Iraqi soldiers by fabricating a story about them stealing the incubators from Kuwaiti hospitals and leaving the babies on the cold floor to die and thus justifying the First Gulf War and created the story of Saddam’s non-existing “Weapons Of Mass Destruction” to justify the Second Gulf War.

Of course the effects of the chemical campaign against the people, the land and the animals are still lasting. You can see many disfigured people crawling over the markets or children lying drooling in the back of a shop. Dioxins are made to last, if poison that is used against people and nature would be biodegradable it would be useless, wouldn’t it? Luckily companies like Dow Chemicals and Monsanto have understood such things and made sure they delivered poison of the highest quality.

I saw a letter on the wall of the exhibition and I found it in the internet too. I want you to read that letter. It is written in 2009 by a Vietnamese women of 23 back then, 27 today. I feel she deserves it that we read her letter.

My name is Trần Thị Hoan, 23, born in Đức Linh District, Bình Thuận Province, Việt Nam. I am a second generation victim of Agent Orange, one among the plaintiffs, representing millions of Agent Orange victims, in a lawsuit against 37 U.S. chemical manufacturers in the U.S. Federal Court, two richest of which are Dow and Monsanto. They manufactured deadly defoliants sprayed in the Vietnam wars containing dioxin—it has not only killed living people during the war, but gradually kills their children generations, like me, and goes on to kill the next ones. It damages my country and other nations beyond imagination.

May I say something about myself: when I was in junior high school, I studied hard to become a doctor to help people in my home town because they were so poor. But this dream was taken from me. I was suggested in college not to follow medicine because I was born with no legs and no left hand. My parents were consumed with grief when I was born and when I started school. I was suggested not to dream about raising a family for fear that my children would be born deformed like me, and the poison might even take their lives. You may have guessed from my personal story, one among three million victim stories, what happen to other parents victims of Agent Orange.

You are a father of two beautiful daughters, and you know how parents love their children. As you might have known, the U.S. Vietnam veterans, sick from Agent Orange, have gotten remediation for their illnesses, but their children have not. How do their children live a decent life like your daughters? In the case of my poor country, veterans of the U.S. war and their children and grandchildren have not received any justice from the U.S. courts: they refused to hear our case against the U.S. chemical companies without explanations. This denial of justice may have rendered void your dream for every child to have the same chances to learn and dream and grow and thrive. When I toured the U.S. cities last October, I found the American people deeply concerned about the problems of Agent Orange, including lawyers. I was totally disappointed with the U.S. Supreme Court running away from this question of justice.

I understand that you are very busy with the urgent matters that face your country, I hope that you would consider the poison from Agent Orange and the lives of its victims with as much a matter of urgency because what they mean to the future of humanity. I hope that you, a symbol of hope not only for the United States, but also for the world, a father who love his children dearly, and a man of humanity, spare a little time to resolve this forgotten problem.

PS: Agent Orange does not discriminate. The American, Australian and Korean veterans who were exposed to the chemicals suffer just as much. And – surprise, suprise – they received a treatment that is only slightly better than the Vietnamese victims. While in Vietnam, the veterans were told not to worry, and were persuaded the chemical was harmless. After returning home, American Vietnam veterans began to suspect their ill health or the instances of their wives having miscarriages or children born with birth defects might be related to Agent Orange and the other toxic herbicides to which they were exposed in Vietnam. Veterans began to file claims in 1977 to the Department of Veterans Affairs for disability payments for health care for conditions they believed were associated with exposure to Agent Orange, or more specifically, dioxin, but their claims were denied unless they could prove the condition began when they were in the service or within one year of their discharge. By April 1993, the Department of Veterans Affairs had only compensated 486 victims, although it had received disability claims from 39,419 soldiers who had been exposed to Agent Orange while serving in Vietnam. In her letter Tran refers to a $ 200 million settlement as compensation for the American veterans. Unfortunately the small print of this settlement makes that it is highly unfavorable for the vets to make use of this compensation meaning that effectively they are not compensated at all. And this is not all, the suffering of the victims and ongoing (successful) attempts of those responsible to avoid the consequences of their crimes has not stopped. No justice has been done.