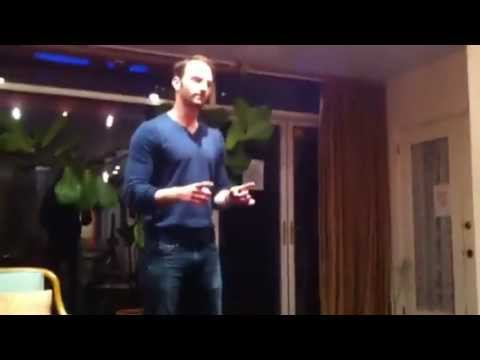 A couple of days ago I met a young amateur boxer. His name is Jon Ebner. He is the guy who introduced me to his Jedi Master Darryl. Jon is currently in the Golden Gloves Tournament, a prestigious amateur boxing tournament in the US. Great boxers often start their careers with winning the Golden Gloves. Jon is in the quarter finals right now and just told me minutes ago that he should win because he is the only one who prepares physically, mentally, emotionally and spiritually.

Last night he invited me to come see him speak at some spiritual book store. He picked me up at the coffee shop where I am typing this post too and we took the subway together. He told me how he loved public speaking and wanted to become really good at it. He had received some training in stand-up comedy and practiced with a group called Toastmasters (an international non-profit organization that teaches people to speak since 1923). I was intrigued and curious because I have a desire to become a better speaker myself.

By now you might know my take on speaking and writing or – in short – communicating: I only care if it is true. I observe very closely and try to report what I feel and experience as precisely as possible. I want to speak the truth for selfish reasons that are not selfish. When I had my transformational experience in 2004 where my inner walls collapsed I realized that the ego or our idea of identity is a lie or an illusion and therefore is obeying the ego completely wrong and useless, destructive even. It is an invisible structure that gives us a sense of who we are but mainly serves as a defense mechanism. When the structure collapsed I felt completely naked and vulnerable but also completely free, whole and complete. The relief was so profound that I knew I would never ever pretend to be bigger and stronger than I was. I would not create a self-image that would separate me from my essence because I was 100% sure that I would create suffering for others and myself. That we are separated from ourselves is our existential problem and our existential challenge. We are on earth to wake up from that sticky illusion.

One of the things I learned about myself in that moment was that I was a lot less confident than I thought I was. Yes, I was in touch with my confidence but I was completely out of touch with my insecurity. From the moment of cracking open I realized I was both and that I had used (or abused) confidence to mask my insecurity. I could see I was certainly not the only one who had picked up that strategy too. But now I had a choice: I could be real or less than real. I chose the first option for obvious reasons.

Being real leaves no space for negotiation. It is about being unconditional. When you have a glass of clear, pure water and you add a tiny drop of ink the water is not pure anymore and if you keep consistently adding ink it becomes undrinkable and soonly unrecognizable as water. The essence is lost. I have no desire to consciously contaminate my water by not speaking my truth. It is hard enough for me to keep it pure when faced with the every day challenges of life.

Then I met Jon who has trained in the art of public speaking. He deliberately uses his voice and body language to capture the attention of the audience. At the same time he genuinely tries to get an authentic message across. Does it feels always authentic? Not to me, it feels more like a performance. But is that wrong? And what if proper technique makes that more people hear him?

My spiritual name or Dharma name is Sho-Jitsu, which means Truly Straight. I try to live up to that name. At the same time I realize that straight and rigid is not the same and I wonder what will happen if I learn more about the technical side of speaking. I just read that Hong Kong has 40 Toastmaster groups. I will take a look.