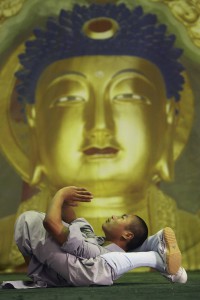 DENGFENG, CHINA – AUGUST 24: (CHINA OUT) A monk performs kung fu at Shaolin Temple on the Songshan Mountain on August 24, 2006 in Dengfeng of Henan Province, China. Shaolin Temple, built in AD 495 in the period of the Northern and Southern Dynasties (420-581) and located in the Songshan Mountain area, is the birthplace of Shaolin Kung Fu. (Photo by China Photos/Getty Images)