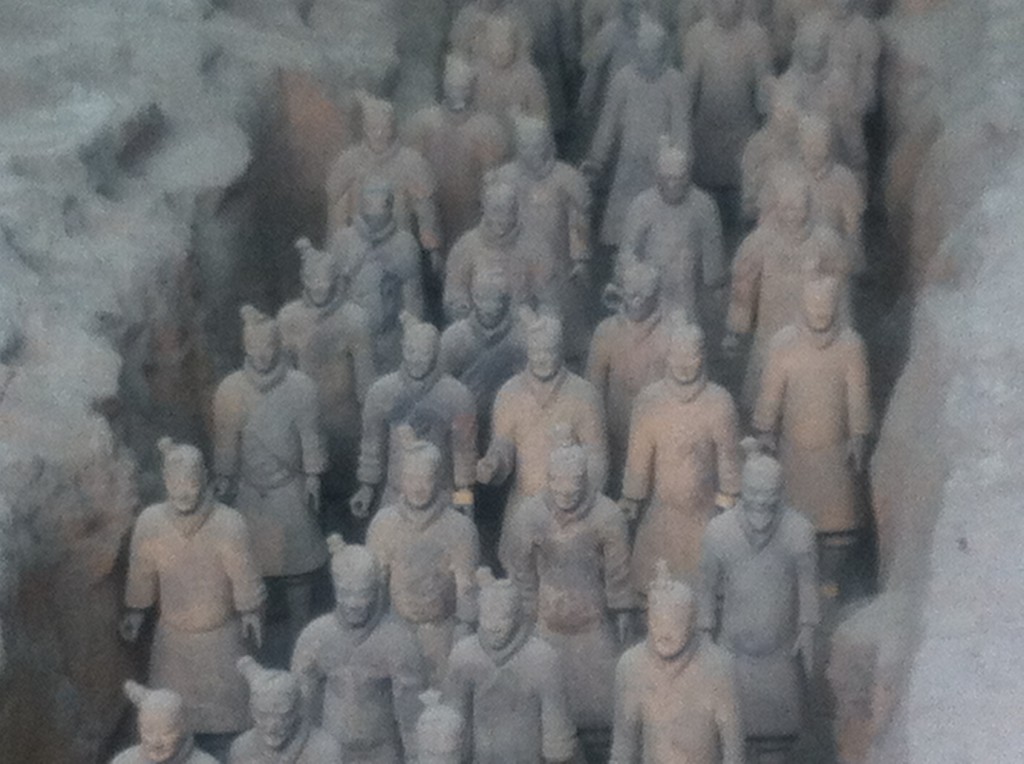 The air pollution is terrible at the moment. I have never experienced smog like this. I feel a burning sensation in my throat, a clogged nose, tired eyes and a slight headache. Also, after many rainy days it is getting sweaty again in Hong Kong. I did not miss that humidity. Sometimes it is so hot and humid outside that I run from a/c to a/c and although I know that a/c is bad for the environment I still wish that the whole of Hong Kong were air-conditioned. Under normal conditions I already sweat easily, these conditions make it look like somebody threw a bucket of water in my face. But the pollution is worse. You know you are breathing unhealthy air but there is nothing you can do about it.

Last weekend I was invited by my client to accompany them on their company trip to Xi’an. Xi’an is one of the four capitals of ancient China (different cities got to be the capital for a while) and it was fascinating to see a tiny bit of China. The scale of things is fast; you immediately notice that you are in a huge country. We went to see the tomb of one of the emperors. He was buried with 6000 terracotta warriors, every single one of them with a unique posture and facial expression. Mind blowing.

But now I am back in Hong Kong. Sometimes I feel I have so many powerful experiences in a week that I can’t keep up and feel stretched in all different directions. I did intensive transformational work with a group of 20 international people, went to China, spent 3 days in the Hilton, flew back, crashed on a couch again, took 3 people beyond an important life obstacle (a business decision, a childhood issue and a cultural/ relationship issue), had a couple of business meetings, was shocked about the bombings at the Boston marathon, lead a meditation session with a group of 10 ladies, received emotional news that the grave stone of baby Sam van Eeghen has been put in place, have been re-thinking my website and had a beautiful meeting with a beautiful woman.

So there I said it. There is woman. It has been going on for a while and every time I was about to write about it something else happened. Also I am reluctant to write about other people and especially women. I assume a girl doesn’t want to show up in my blog after one night with me. Not that I had many adventures like that in this journey but still, you might understand the idea.

When I was in Iraq (before India) I was dumped by my now ex girlfriend. The pain that I experienced inspired a healer friend from Israel to recommend me a movie about tantra that turned out to be a real eye opener for me. The movie inspired me to participate in a tantra workhop in India. There were many beautiful women there but

I feel confused. I just came out of a meeting where I was accused of being less then discrete in my posts. Some people might have felt I breached confidentiality. I have re-read the relevant posts and personally I don’t see anything inappropriate. Nevertheless: it is something that I take very seriously. Seriously enough to make me stop writing about my romantic endeavor because there is an ‘other’ involved who might want to have some control about what I share and what not.

Back to the woman but a bit more anonymous then. She confessed to having special feelings for me in November. I was flattered and also affected, I noticed not much later. But the situation was impossible. I was in California at the time and had no clue how my journey would unfold and did not see how I would come to the other side of the world again. In my mind I still thought I should spend more time in the USA. When I was in Cali, Colombia we spoke again and I explained my concerns, why it would never work. When I saw her face all my problems just vanishes. I told her not to worry and that I would make it happen. I would conquer all obstacles that I would have to conquer. I would cross all the mountains and rivers that were between us. The reason why I put so much emphasis on doing paid work was because I wanted to create a bit of a buffer so that when I would meet her I had enough in my pocket to take her on a nice holiday. It made ‘failing’ in New York extra difficult for me; I did not only feel like failing as an entrepreneur or a facilitator but also as a provider. I had a wealthy and generous grandfather who was perhaps not very good at admitting he was wrong but very good at spoiling the people he loved, especially the women in his life. I guess I inherited or acquired the desire to spoil and I find it painful to admit I can’t. Yet. Because I have not let go of the desire.

Meanwhile the moment I will see her is approaching rapidly. I feel that the pollution is scaring me out of Hong Kong. I can taste the foul air on my tongue. It makes me want to buy a plane ticket out of here. If there is something that I want now it is an island with little traffic, fresh air and healthy food. And a turquoise sea. And a gym. And a room with a view. And a kingsize bed. And wonderful and gorgeous company.

I am such a modest guy.