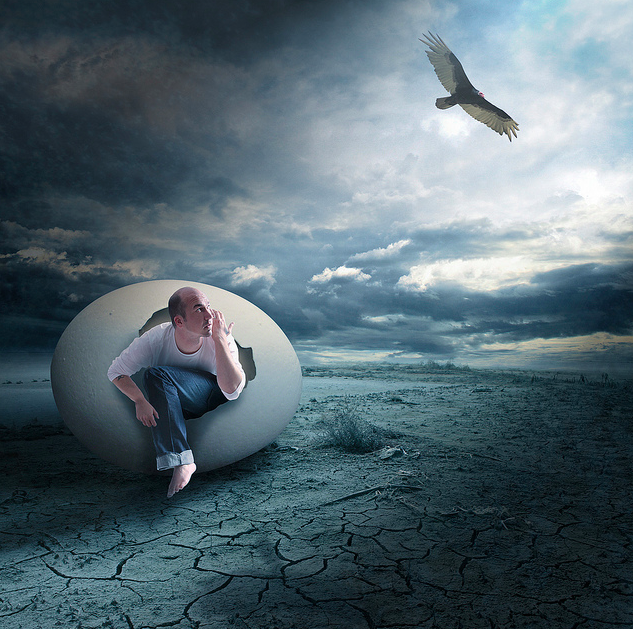 Let’s be honest. I’m terrified. I have taken on this huge challenge to travel the world and I’m scared shitless. The last weeks I spent most of the time with a huge knot in my stomach, alternated with occasional moments of happiness, gratitude and humility.

I assume you know that I speak tirelessly about the importance of not betraying ourselves, not acting from fear and living from the heart. And I also assume that you know that I try to practice what I preach. What it comes down to is that I consciously face my fears on a daily basis.

Somewhere earlier in 2011 a colleague made clear to me that to be taken serious in the corporate arena it is extremely helpful to have written a book. Actually, it is not about being taken seriously, it is about providing the person that hires you an emergency exit in case you screw your assignment up. Since nobody has the courage to put his or her reputation on the line they rather not hire you on a personal basis. Your failure might rub off on them. But when you are an author of a real book they can always say: “hey, he is the writer of this-and-that book. It looked solid.” The book is a way for the executive to hire you without his reputation being scorned when you screw up. That was the moment where I realized I needed to write a book and that it should address cowardice. I realized I needed to write about warriorship because the term ‘basic goodness’ comes from the book “Shambala, the sacred path of the Warrior” (that’s where the quotes in the ticker tape come from).

Oh fuck, I have to travel the world!

It took me a while before I had found the right angle. I did not know how to approach the whole paradigm around ‘a book’. To write a book, it sounded so.. so professional, academical, serious and mature. The idea was, and still is, very intimidating to me. I spoke about my struggle with Jens Olde Kalter, a friend who had just published his first book “De Kickbokser” (The Kickboxer). He told me to write a fictional back cover, as an exercise. I did that. I sat down and wrote the back cover of a book that I would intrigue me. I wrote a summary of a story of a man who goes into the world to find what Warriorship means and if there are people who live accordingly. I was quite happy with the result, I must say. And immediately my mind started thinking about how to translate this obviously grandiose idea to the modest Dutch market. Then I saw this video of Nick Vujicic, an Australian guy who is born without arms and legs who became an awesome motivational speaker. His message is ‘don’t think in limitations’. And it hit home hard. I caught myself killing a pure idea, an idea that came from my heart. I, a big strong guy with 92 kilo’s of muscle and 42 centimeter biceps, duped the idea of going on a journey to gather data and life lessons for a book impossible while this 27 year old Aussie with no arms and legs travels all over the globe and speaks to a million people a year about how they can follow their hearts. Our bodies are not the obstacle, our mind is. Ouch.. You can blame me for many things but when the Universe shouts in my ear so loudly I listen. I literally went like “oh fuck, I have to travel the world!”

I realized I must obey this sign and asked myself “when?”. Then I realized that I would turn 40 soon, a perfect symbolic age. I asked myself “how long?” and I realized the answer was “one year”. I must search the planet for a full cycle around the sun, thus creating a rite of passage. It must be the final break with the old me and the birth of a new, more mature me. The journey would be symbolizing the transformation of the Struggling One into the One Who Takes Responsibility And Claims Authority. Now I saw so clearly what lied ahead of me that it was not a plan anymore. It became a calling.

Once you have learned to listen to such calls beautiful and magical things happen to you. But for the ego it is terrifying. Because there is no illusion of control anymore, the ego is not in charge. All the time the ego tries to gain some control back and it fails over and over again.

Sometimes I really don’t know anymore who is controlling this ship, the ego or the higher self. Why am I always taking decisions that make me feel so fucking vulnerable? I remember again, it all changed when I saw the damage my protection mechanisms had caused me and others. I realized that hiding my vulnerability caused suffering and delusion. But I used to suffer unconsciously from hiding my fears and now I suffer consciously from facing them.

One of the most valid arguments my ego came up with to convince me not to go is because I couldn’t afford it. Sounds plausible, don’t you think? This of course is not enough reason not to go. It is just another fear, a limiting thought, something I should face. Actually, it is an opportunity to be vulnerable, to create a flow of energy.

The idea is great. I should venture into the world with an open heart, offer whatever I have to offer. Be it in writing articles, coaching people online or giving cool workshops wherever I go. Social media will be how the Universe manifests. You, my audience, can follow me and become involved. You can share my stuff, connect me with inspiring people, hire me or help. PayPal will offer the opportunity to make big or small donations here. By constantly updating my site with new insights and adventures and you reading and sharing we will create a snowball. Good things will happen to when we start spreading goodness, this adventure will create its own momentum. That’s the theory.

The fear of failure I feel sometimes is hardly bearable. And – as always – it has changed during the process of writing. I feel better now, open and quiet. I feel that on a very deep level I am asking for permission to exist. That’s why I created a situation where the world can either condemn me or approve of me, by embracing my project or ignoring it. I want the approval of the whole world. Because I myself can never convince myself that I am good enough. In that thought alone lies self-acceptance. I’m home.