I am back in Mumbai, back on the couch where I arrived two weeks ago. I spent the night in the train from Goa to Mumbai, first class even. And I brought a young Indian friend, Ravi, who went so far out of his way to be helpful to me that he got himself in trouble. Since I had invited him to the workshop I thought I might as well take him to Mumbai a day earlier. Let me tell you what happened.

On the other hand, I must say that striking coincidences happen sometimes. As in the case with this guy Ravi. He started talking to me just as many Indian men do (hey, I just realized women hardly ever speak to me here). I must say that most Indian conversation is superficial and boring to me. They ask me where I am from, what my profession is and what I think of India and that’s it. Ravi did the same. But this time the conversation did not stop.

Ravi told me he had spent the night on the train station. He wanted to see what happened there during the night. He saw the desperation of poor and hungry people and had an insight that people don’t have much chance to become aware when they don’t have food in their stomach. Famous people did the same observation, or own their fame partially to that observation. Bertold Brecht said “Erst kommt das Fressen, dann kommt die Moral” (first comes the grub, then morals). Maslow pyramid shapes hierarch of needs tells us that we need to have our most fundamental needs met first before we can move upwards. Food and shelter is at the bottom of the pyramid, spiritual or self-realization at the top.

I think it is remarkable for any 23 year old to spend the night at the station to observe life and for some reason it is even more remarkable for a young Indian. People are so used to poverty here, they seem to have developed a tough skin. I remember that when I was that age I divided the world in winners and losers and I did not have much empathy for losers. I think that testosterone and competition does that to young men. Assuming that Indian guys are the same makes Ravi’s case a bit more unique in my eyes.

Ravi showed me his diary. I read pages filled with existential questions, hope and despair. This was a guy on a search for answers. This guy was me. Somewhere I read that he knew he had a purpose but he didn’t know what his purpose was. But a blacksmith would show up in his life that would shape the burning metal into the right form with well aimed blows.

Is he talking to me? Is this a coincidence? Am I the blacksmith? He told me that once, when he felt desperate, he went for a run and with every step he said to himself “I must be brave”. Is it a coincidence that he starts talking to a man to whom warriorship and courage are central topics in life? A man who will give a workshop about “The Quest for the Noble Warrior” in 2 days?

When we got off the train to Goa I asked him to assist me because some difficulties had arisen around my connection to Mumbai and the civil servants who sell the tickets at the train station seem to be even less service oriented than else where on the planet. Turned out it was impossible to take the afternoon train. Ravi stayed with me and canceled his ticket to make sure I would get on the train of 6 pm safely. He would take the train of 7.30 to his village. When my time of departure was nearing he found out that his train was not leaving at 7.30 pm but 7.30 am the next morning. This meant he had to spend another night at another train station.

I had already invited him for the workshop. Now I decided to invite him to come to Mumbai with me. I felt a bit concerned about imposing on my host but I could not leave my helper and fellow seeker there.  I also felt that I needed to introduce Rave to my host. I wanted to connect seekers from different generations and genders to each other. Indian society is very conservative and I felt it could be refreshing for both to meet each other.

Now I am back in Mumbai, back on the couch where I started my Indian adventure. It feels like coming home. And I truly wonder if this was pre-planned or not.

Below you see a video of the scenery as seen from the train (also notice that the doors stay open during driving). When I pan inwards you see a young Indian guy wave at me. This turned out to be Ravi and the start of our connection. 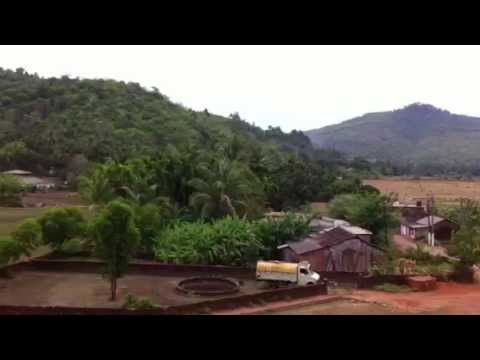