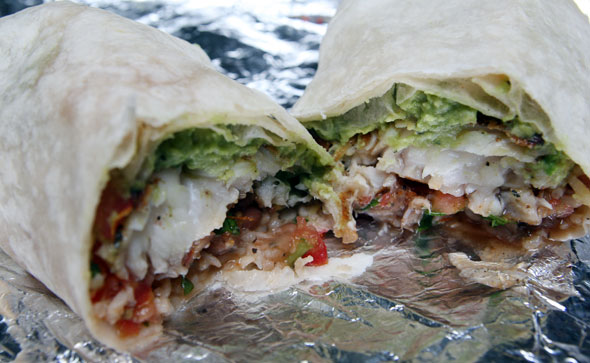 I feel like am being punished. I really do.

Last Monday I had my first date ever in the United Stated and pretty much the first date of this whole trip. One of the things we did was having a burrito. So it was not just my first date but also my first burrito. I thought it was the most amazing snack ever. It definitely beats shoarma as a midnight snack. It’s a some sort of monster wrap with beans, chicken, sour cream, guacamole and more Mexican shit in it. It was almost a pity that I wasn’t drunk. I am pretty sure that burritos taste even better when shitfaced.

Today I decided to go on a new burrito mission. As I was walking on the street, hunched, with my face buried in my iPhone, trying to find the way, I asked a girl for directions. She was sweaty and radiant and beaming energy. She just came from the gym and was walking in the same direction as me. We start talking and the topic goes from working out to burritos. Turns out that she loves burritos too, which I find a very funny coincidence. I invited her to have a burrito with me but she didn’t have time. But I was invited for a drink with her and friends tomorrow.

What keeps amazing me is how things weave from one experience to the other. And what’s up with the coincidences that seem remarkable but meaningless? Yesterday I had 4 unexpected interactions with random people who all had a connection with The Netherlands: a black homeless guy turned out to have grandparents from Surinam and knew some Dutch, I asked for directions to random women who turn out the be Dutch, a lady in a shop lived in Amsterdam for a while and a Irish guy from CouchSurfing who invited me for drinks had stayed in The Netherlands for a while. I traveled all the way from Israel to Hong Kong without meeting one single Dutch person and yesterday everybody I talked to knew a few words of my language. What are the odds?

It feels like I am learning a whole new language. The last 8 years I have been studying and teaching the language of the heart. My experiences in March 2004 taught me that the heart is always communicating with us but we have forgotten the language. The experience brought back my memory of that language and from that moment I listen carefully to signals, energies and emotions that go on in the body. The last months it seems that I have to learn how to read the world. That answers seem to come from outside instead of inside is a new thing. Many astonishing little miracles have happened followed by incomprehensible phenomena. Like all these people with connections to Holland.

Now back to the burrito and the fit burrito connoisseur that I met on the board walk outside of my hotel. She referred me to a better alternative than the one I picked from the internet. When she gave me her number I promised to text from the restaurant to give her mine. In my first text I thank her for her kindness and for trusting me with her number. I add semi-jokingly that she can Google me, to check if I am a creep or not. It was not completely a joke: firstly I want women to feel safe around me but have a posture that can be perceived as intimidating and secondly there is a scent of cautiousness, fear and distrust that permeates life here that seems to be specific to American culture. Nowhere else I have been warned so often to avoid certain streets, areas and neighborhoods. But also in the language people seem to be taking a lot caution to be perceived as mindful (which seems to contradict the predatory business mentality but that is another story). And I have a feeling that I am learning this the hard way: my Dutch cheekiness might have crossed a cultural line that made it sound to an American receiver as offensiveness.

And you know why I think that? Not only because the text conversation suddenly stopped when I was just warming up (which is already a pretty strong indicator, I admit). But because the burrito suddenly feels heavy as a brick on my stomach. I am not kidding! It is a sign, I swear it! That thing went suddenly like ‘‘clunk’, take that! A sledge hammer to the stomach!’ Like I physically hit a boundary. “This is what happens when you go too far, buddy” spoke the Universe. Blunt Dutch people deserve blunt treatment.

Ok, ok, I get it. Sorry Universe, I will try really hard not to tease Americans anymore. And I will never eat a burrito again.