Baghdad has been pretty tensed these days and today I found out why. This morning I was supposed to be picked up at 8 am and the workshop was supposed to start at 9. To my frustration my escort was 1,5 hours late. It was impossible to get a taxi and the Iraqi’s don’t feel safe walking with a foreigner. Overnight the amount of security around my hotel had quadrupled. You see soldier every 100 meters.

When we were pretty close to the training facility that sold the course there was an explosion. I felt the ground shake. Immediately there is gunfire. Armored cars with soldiers and sirens speed to the location. Turned out there were 15 car bombs today, killing 44 people and wounding over 160 but I didn’t know then. I had to go to work.

A few participants were unable to come due to blocked roads but most of them were waiting for me. It was a humbling moment for me to feel how hard it is for them to come in time for work. When I expressed it I could see they were receiving me. Nobody was angry or frustrated because I was late. Under these circumstances they knew I did the best I could do.

I had more or less expected to be working with young Iraqi’s. I don’t know what happened because sometimes the communication is different than I am used to (in other words: nobody tells you what is going on). After 9 days of waiting in the hotel I was picked up without prior notice, brought to a facility and met then people. I did not have one second of preparation. It turned out that my participants are medical professionals, lawyers and media people from the age of 35 – 65. Not exactly youth. I have the feeling that the owner of the training facility, Dr. Zead, sold my workshop in his network. But how he found 12 participants in 2 days who could take 5 days off is a miracle to me. Side note: we named the workshop “The Quest for the Noble Leader” instead of “The Quest for the Noble Warrior” to manage expectations and prevent potential suicide attackers to happily subscribe to the course.

Yesterday, I was a bit intimidated by the formalities. These were people with respectable positions in their community and they dressed and behaved accordingly. But since I was late I did not have too much time to be nervous. Only few of them spoke English so my words were translated to Arabic. I assume they were taken off guard as well because there sense of a seminar is listening to an authority and take notes and not a dude in jeans that let’s them share their feelings. To my surprise it went really well. Actually, it was totally beautiful to see them open up.

Meditation is so unknown that there is no word for it in Arabic. When I try to explain what it is by showing a pic of me meditating in Miles’s dojo they say “ah, yoga!” But because everything went well yesterday and chances are small that they will meet another meditator soon I decided to introduce them to meditation by just throwing them in without any warning or too much explanation. I feel we cannot achieve outer peace without understanding inner peace and meditation is something you should do without thinking too much about what’s going on anyway. Then the car bomb exploded. What to do?

I decided that the need for peace certainly did not diminish by the explosion. I took them straight into 40 minutes meditation divided in 2 consecutive exercises. The atmosphere was so powerfully open; it was unreal. To sit with people in the middle of a war zone, creating a peaceful place together while you can hear gunfire outside was a mind-blowing experience. Perhaps in the west meditation is seen as a trendy gimmick for stressed out yuppies and is taken serious by the occasional freak like me. Here there is a real need for peace, here people really want peace. I had felt a slight concern to make a faux pas but I felt there was a consensus that we were the only ones making sense in a crazy world. Maybe we were the eye of the tornado.

Working with my Iraqi participants makes me feel sad, humble and grateful. I can feel that what I do is totally new for them but they jump in like fish in water. These are highly educated and highly motivated people who are starving for input and inspiration. Perhaps for the first time in their lives they receive some nourishment for the heart and the soul. I am so happy that I can at least I can give the little I have to give.

This day makes me truly feel hopeful for us as a race. If I can find such inspiring, intelligent, warm-hearted, open-minded and ambitious people in the middle of a war and we can work with concentration and devotion while bombs are exploding we must be able to join forces and make a difference one day. Perhaps we already started. 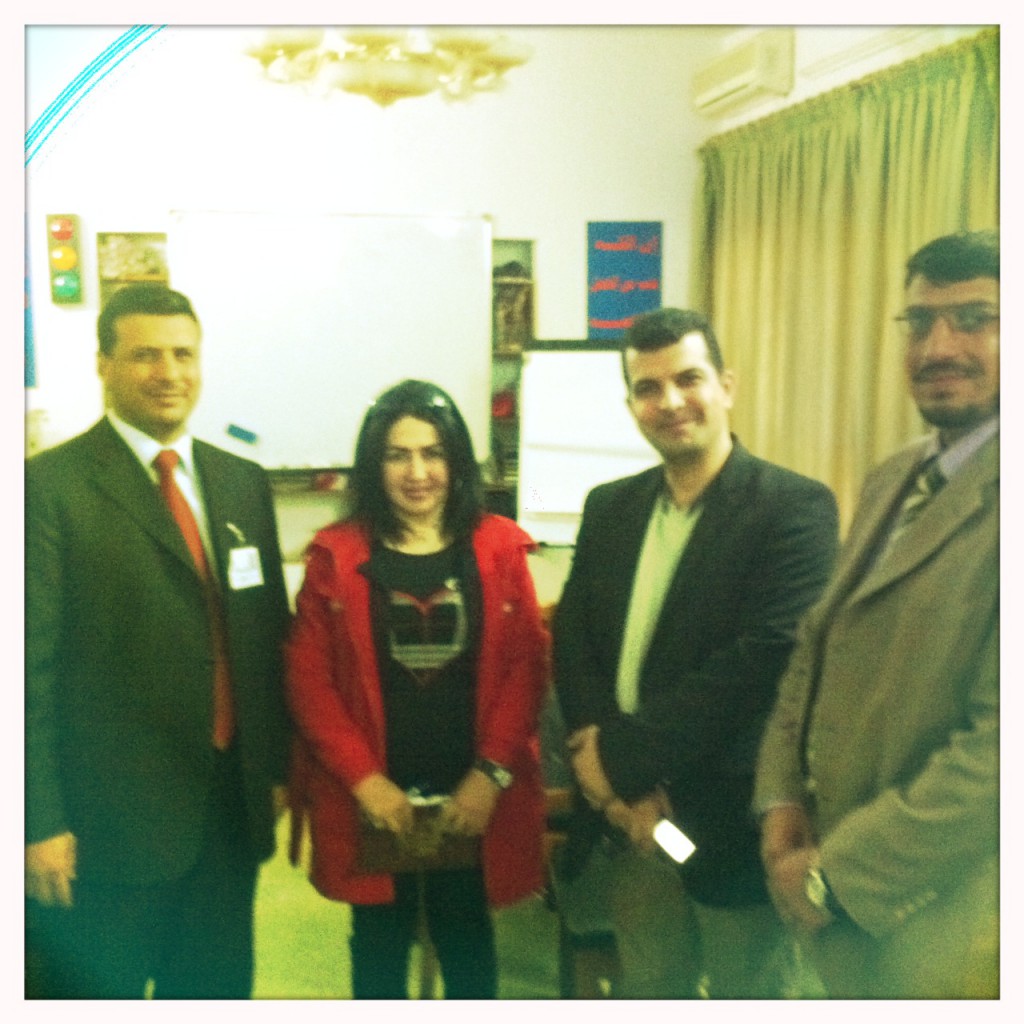