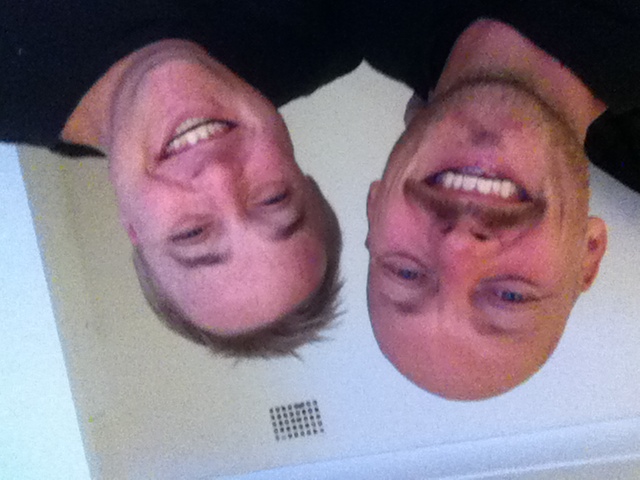 The idea was that I would spend this day driving through the fastness of Australia, nervously looking at my GPS and fuel meter. Because you never know, maybe these kangaroos are meat eating predators and you dont want to get stuck in the middle of the desert. But it didn’t work out that way.

This morning I went to collect my hippie campervan. As we are going through the procedures and they are trying to sell me all kinds of additional insurance we find out that I have to pay a bond of only $2550,- which is €2039,-. My credit card bounced and this is – most likely and hopefully – because it has a limit of €2000,- (I am not broke but the card could be broken, that would really suck). And the company regulations allowed for ZERO alternatives. Fucking annoying. I could not pay cash, nor via their website, not via PayPal and I certainly could not just pay them $2499,39 (equals €2000,-) with my credit card and give them the other $50,61 out of my back pocket. Bureaucratic obstacles and stupid rigidity makes me want to smack people.

I chose not to smack the employees of Hippie Campervan Rental because I figured it would create more fuss when I want to pick up the van tomorrow. So now I have to wait till the banks are open in Holland. This I am doing while writing at my friend Simon’s roof terrace. I feel the spring sun on my shoulders and hear cheerful birds twittering behind me. For my Dutch friends: twitteren means ‘kwetteren’ or ‘tjilpen’. Net opgezocht. Dat je niet denkt dat die vogels aan het internetten zijn. For my English speaking friends: try to figure out with Google Translate what is the inside joke here.

This interruption of my plan gives me the opportunity to tell a story that resonates with this moment and has impressed me. But before I do that I want to share something else. Simon and pretty much most of his friends are gay. It is worth mentioning from the perspective of my journey and the diversity of people that I am meeting. After hanging out with Buddhist martial artists, religious Christians, Chassidic Jews, Lebanese creatives, pious Muslim intellectuals, free spirited Hindus, Dutch expats and Chinese computer geeks we can now add the Sydney gay scene to that list.

As I wrote right after my arrival my landing in Sydney was kind of hard: jet lagged, strange house, new country and painful news. Simon was very hospitable but also quite busy: gave me the keys and went to work. I asked myself what I am doing in the house of this man. Why are we brought together? At the same time: there was no awkwardness or tension between us. Our sense of humor matched surprisingly well (which was a relief after months or regular uncomfortable silences: sarcasm and irony have not yet been widely accepted as a great way for expressing the relativity of life).

Until three nights ago. Simon’s boyfriend had gone to bed and Simon, friend of the house Antonio and I were chatting in the kitchen. At some point Simon saw that all three of us had gone through the same experience of break-up quite recently. It was kind of a magical moment: all of us saw simultaneously that we were all the same boat. The energy in the room shifted completely. From chatting while standing up we sat down and talked. It was enlightening to hear the different but similar perspectives on love and relationships. We had a beautiful bond: three men, in the middle of the night, somewhere in Sydney, talking about life. Two men are gay, one is straight. A Dutchman, an Australian and a man of Italian descent: all on their paths towards healing and understanding, sometimes successful, sometimes not.

For the first time since my arrival Simon asked about my work and how that mission got started. So I told him about my awakening experience in 2004. How I “fell out of the Matrix” and my experience of reality shifted completely. And this triggered an amazing story in him.

Simon told me how he once drove from Sydney to the home town of his parents. His parents and sister were in the car too. After a couple of hours of driving 120 kilometers per hour a thought comes into his head. He thinks: “wait a minute, I have my whole family in my car” and he reduces his speed to 90 kilometers per hour.

In the distance there is a 19-year old man with a flat tyre. He is busy changing it. The emergency lane is kind of narrow so he is partially on the road. He has no choice. A truck comes up and hits him. The young man lands on the asphalt. Simon has enough time to stop and go help him.

It is one of these moments were time slows down. His stepfather runs the other way to stop the traffic, his mom is calling the emergency services. Simon runs to the victim. When their eyes meet Simon realizes that they know each other although they have never met. The young man dies in his arms.

And what happened was this: it was perfect. Simon knew that it was meant to be that this young man would die in his arms. He felt a Divine presence and a gateway opening up. He felt the soul leaving the body. Moments later he knew he was holding an empty body. Later he would have exact the same experience when the child of his sister was born: again the Divine opened a gateway. It blew his mind: birth and death is truly an arising and returning from one place, a place of love.

When he started looking back at all the peculiar events at the day of the accident he realized he got lost and sidetracked in strange ways. He knows Sydney like his back pocket but still took wrong turns 3 times in a row. He reduced speed when I had been speeding for hours. I was so clear to him that he had to be exactly at that place at that time: he had to be there so that the young man could die in his arms. I was deeply impressed.

The story gave me confidence and trust. Things go exactly as they are supposed to go. I don’t have to worry about what will or will not happen in Sydney, or for the rest of my life for that matter. I also feel that I came exactly to the right place so Simon could give me this message. It showed the difficulties around the campervan in a different light. For some reason I should not be on the road today.

I just received the most beautiful, little gem of a message from the one formerly known as the Little Pannacake, filling my heart with love and setting me free. Life is magical.

PS: I thought is was a bug in WordPress that showed the pic of Simon and me upside down. But he says its because we are in Australia. I guess this is also meant to be.