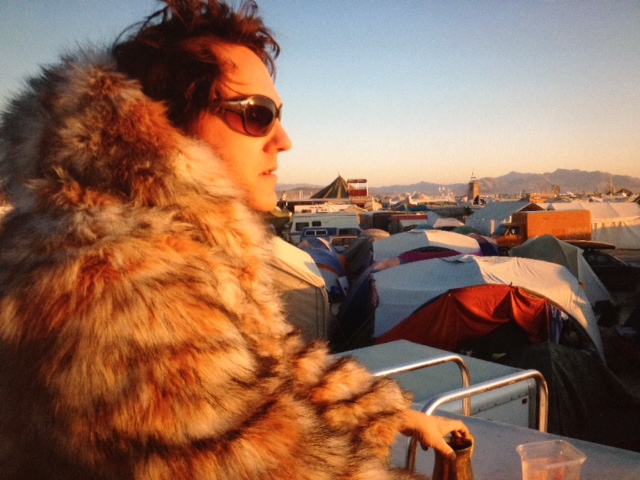 I feel sad, lonely and lost but I am keeping up appearances. I am contemplating on death, loss and hope and expectations.

James never came back from a small solo retreat he planned for himself. A year ago his father died and he went into nature to commemorate that. He wanted to be alone with his thoughts, memories and the elements, I guess. According to the report his friend and teaching partner Michaela received from the Rangers who found him he slipped from a rock during a full moon hike and hit his chest. He died from his injuries. Perhaps he died under a full moon.

I met James 2 or 3 times on the path. Last summer we had a brief email exchange. We went through a similar development. When we first met he was an ex-nurse and I an ex-advertising guy who had chosen a path of following our hearts, opening up and serving others. 6 years later, in 2012 we are both life coaches. James calls himself The Wayfinder and I identify with Basic Goodness. James was the same age as me, shared the same values and vision as me, we had the same teachers and we did similar work. Just like me he ate healthy, worked out, meditated, spoke and listened from the heart, practiced unconventional martial arts and – as I just found out through his website – had a tantric practice. We lived in different countries but we played for the same team and participated in the game of life following the same rules.

For me the message is clear: his accident could have happened to me. Just 4 weeks ago I got lost trekking in the Himalayas. Nothing happened. I did not reach the destination I had in mind; I had to return. I got exhausted and slipped once or twice, cut my hands and developed a couple of blisters. That’s all. But I am sure that James also just slipped, maybe just once.

Yesterday I felt the darkness washing over me every time I was alone. I felt unsuccessful, dependent, incompetent and redundant. I asked myself what I’m doing on this planet and why for God’s sake I put myself through the stuff I am putting myself through. To make matters worse Holland lost it’s first match against Denmark and James lost his life. It sounds like a disrespectful comparison but it is connected to my longing for a break-through, for success, for being rewarded, for miraculous liberation. What I want to hear is that a likeminded soul like James calls me up and says: “Hey buddy, remember me? I need you here. Hop on a plane and let’s do this or that awesome thing together”. I don’t want to hear that a good guy like him slipped from a rock and is now dead. Similarly I want the Dutch team to win the European title so I can cherish the amazing memories with me fellow Dutchmen and millions of unbiased football fans for years.

Sometimes, on days like these, I feel like giving up. I want to crawl under a stone and never surface again. I don’t want to expose myself anymore. I don’t want to fight for goodness, justice or awareness. My mind is telling me that I won’t win this battle anyway and my mind is probably right. Lately I sometimes feel that my verbal skills are weakening and my clarity is fading when I work. I really don’t know what I have to offer. I wonder what is wrong with me, why I experience things as so difficult.

What would people say about me when I die? It is a well-known exercise to visualize what would people say on your funeral and then visualize what you would like people to say. If there is a big gap you have work to do. By writing and thinking about James and reading the beautiful words people are saying on the memorial website his friend created for him I realize that chances are big that people would say friendly things about me too. James’ death is not a reason to give up. The loss of the Dutch football team is not a reason to give up. These events are instruments to see my attachments to a preferred outcome, to like-minded people, to approval. I would find it ridiculous if somebody on the planet would give up living his dream because of my death. And I dare to completely trust that James felt the same. I don’t want you to hold back and he didn’t want me to hold back either, not when he was still alive and not now.

I just looked at James’ Twitter account and this is one of the last things he tweeted:

All know the way. But few actually walk it.

I hear you, my Warrior brother. Tonight I will give a ‘Mindfulness for Business Warriors’ course in Hong Kong Central. I will pick up the pieces, scrape myself together and give everything I got. There is only one way and that is all the way. You agree, don’t you?

I wish you a swift passage to the other shore. Keep an eye on your loved ones. See you in the next life.