I promised you and myself a story from Amman. I will be a quick one, I will just share some observations.

I am on the airport now and a little bit nervous. I’m flying to Beirut and they are not supposed to find out there that I have visited Israel because Lebanon considers itself at war with Israel. People with an Israeli stamp in their passport will not be allowed into the country.  The way to avoid that problem is to apply for a second passport if that is possible in your country. I did that. Now I have to swap passports in the plane. To Lebanese immigration it should look as if I’m coming from Europe. It’s a known method but it is still kind of nerve wrecking.

Although I spent less than 24 hours in Jordan it was interesting. People are very friendly but there English is not very good. They know one word: welcome. But they say it all the time. It really did make me feel welcome. Welcome is a word that opens the heart, just like yes and thank you. It allows friendliness to flow.

When I walked around in the neighborhoods of my hotel I saw many saloons. I was looking for a coffeeshop with wifi so I thought I should check one out. Turns out that all these saloons are hair saloons, filled with men. It makes me smile that the fact that the country is obviously fairly poor doesn’t interfere with their vanity too much. 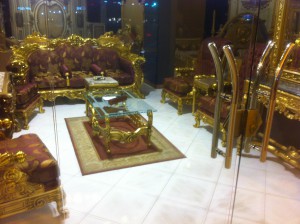 Arab people love gold. Or they love very ugly furniture. Or both. Just watching through a store window is an experience.

What I think I am observing is that the level of economic development influences the types of shops and stores. In Europe and Israel there are many coffee places, here I couldn’t see any one. My guess is that just sitting down for a while to drink relatively expensive coffee is a luxury that people are unable to afford, both time and moneywise.

On my way to the airport I asked my cabdriver if he was happy. He said yes. Life is good because he had a job and some time to spend with wife, child, family and friends. He made more money in Saoudi Arabia but his life there only consisted of sleeping and working. We showed each other pictures from our phones and I realized that the really unexciting pictures taken in Amsterdam were actually a really nice way to share a slice of my life. I liked his pictures from him, his son and a friend having food at his home just as much as he liked the pic from my bike locked to a bridge on one of the canals in the Red Light District. His exaggerated posing like a gangster, rapper or model in every pic cracked me up.

It is Valentine’s Day today and I’m 40 and am single. There is some sadness around that.

But when I opened my laptop this morning there was another cool message from a stranger reaching out from somewhere on the planet, Hawaii in this case: “Thank you for doing what you do, sharing the good word and inspiring not only good men, but good people. What we need is a culture of warriors and we start by sharing our story. Basic Goodness is a perfect reference point. Travel well. Stay big and bright. Perhaps we will cross paths.” I hope she doesn’t mean ‘big’ in the Samoan way and hope I will still feel happy in three hours from now. Here we go again.