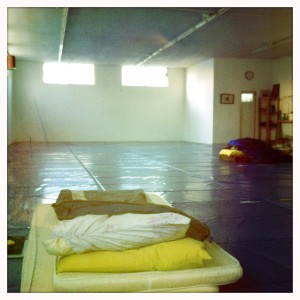 This morning I woke up with a feeling of great autonomy. I had a good night sleep on the floor of the dojo. (In the picture you see my bed in the foreground and my fellow uchideshi still asleep in the background.) I felt that I could survive anywhere and that my meditation cushion would always be able to save me. Then that feeling of autonomy shifted into loneliness and sadness.

Why am I feeling so sad suddenly? Two things come up. There is something happening that I didn’t foresee. An important reason for me to go travelling is that I want to search for inspiring people, I want to know ‘the 21st century warriors’. There is an implication there that I want to find people who are more evolved, more inspiring, clearer and more successful than me. Ouch, it hits me. As I type this I realize I am looking for father figures, people to look up to. Goddammit, is the pain of growing up without a father still driving me? I thought I was beyond that. But my need is not met. Because what happens is that when I tell my story about what I’m doing here I am all of a sudden the inspiring dude.

This saddens me because it has many implications. It means that chances are small that I will ever feel what it means to have a father. It also means that if I’m amongst the bravest there will be never many people that will understand me and that humanity and our planet will keep suffering from our greed, fear and ignorance. But the most difficult part is that I have to let go of the idea that I’m inferior. Where would I be without something to strive for? What if there is no special species that is more human than me?

Then there is the second thing. Yesterday I had coffee with an American tantra teacher. She invited me and I felt honored. Our meeting was very interesting. When a practitioner (when I say that I mean meditator) meets another practitioner who has gotten rid of a lot of unawareness they recognize each other. Because both people are not hiding behind masks they allow the other to look into their eyes. Defenses are dropped.  This happened during coffee and I could physically feel the energy flowing.  Coincidently the shaman that I met the first night also had lunch in the same place and came to say hello and promised he would call me. I repeat: he would call me. And I felt blessed. I felt like wow, it is really happening, I am meeting awesome people and I am not rejected.

My lunch partner is expressing how she enjoys looking into my eyes. Then she tells me that she is also a little bit uncomfortable because she is attracted to me. All of a sudden there is an extra layer added to the meeting. She is happily married but in an open relationship. I know her husband. First I took her confession just as a compliment not as something that needed further ‘exploration’. I found out she felt differently.

Although I obviously like being considered attractive (I prefer that over being considered unattractive) it saddens me that the other experienced an exchange that I was valuing as very real differently. I’m sad that it’s so hard to meet somebody on the same wavelength. Even when I thought I met somebody on the same wave as me she also wasn’t. It seems to me that we are all inherently lonely. The consolation is that we are very much together in our loneliness.

Paradoxically enough I can understand how it is for attractive girls when a guy always wants ‘more’ than just friendship. It feels like being a prey of the other person’s desire or lust. When you go along with it without feeling it yourself, you are depleting yourself and deluding yourself and the other. When you express your boundaries you are disappointing the other. 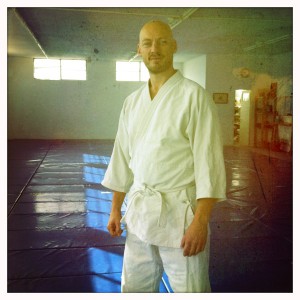 Now, an hour later, I see that it is all about rejection and acceptation. I fear being rejected by the people I look up to because my father rejected me. I want to be accepted but I even reject their acceptation because I don’t fully accept myself. I don’t like to be put in a situation where I have to reject a woman because I reject rejection. I need to accept that I’m a person that rejects. I need to accept that I am hurting like my father.

How to learn that? The irony (or beauty) of the situation is that aikido is all about accepting the other and moving along, it is about keeping your balance within the continuous flow of forces. It is about boundaries and being graceful at the same time. Exactly what is needed. I am very much a beginner here, in every sense of the word. But I am at the right place.