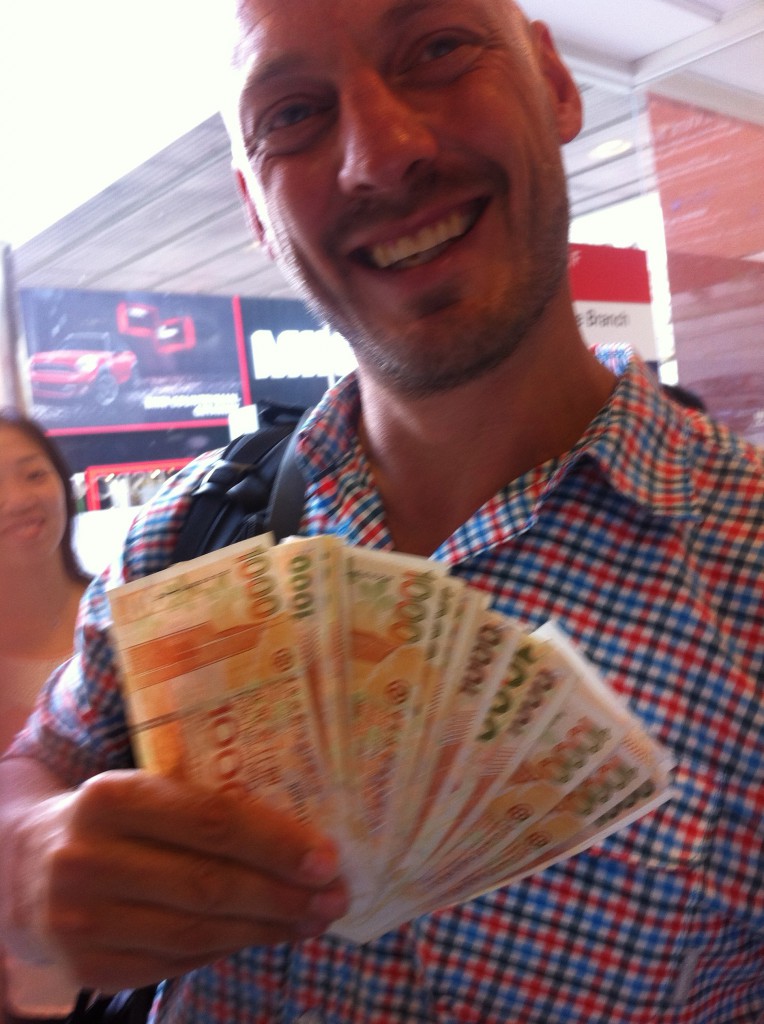 Something remarkable just happened. Well, remarkable might not be the right word. But I am intrigued. I just boarded onto the plane to Pasto. I arrived in Colombia last night after a flight from LA to New York and from NY to Bogota. I am in Colombia to participate in a shamanic retreat. Today the group is slowly getting acquainted to each other. One of my fellow participants seems to be a nice guy who does something similar to me. He flies all over the place, giving seminars and courses on leadership and stuff. He has written a book about how to apply Buddhist teachings in business that is currently a best seller in his home country. So you could say that he has accomplished a couple of things that I would like to accomplish in the near future.

He said to me he really loves money. He loves the energy of money. He told me that money has a beautiful energy if applied wisely. He welcomes money into his life; he really appreciates it. He treats his money respectfully. Literally that is. He doesn’t fumble bills carelessly; he keeps them neatly folded and mindfully tucked away.

Now I ask myself: do I love money? And my honest answer is: yes, I do. And I didn’t know that. So it is obviously not a very clear and pure love affair. I am also intimidated by money and it is a source of concern. Perhaps I am even afraid that money will abandon me like my father and the women in my life did. That is a pretty deep fear. Such fear of abandonment creates unhealthy clinging and resisting; a self fulfilling prophecy is created.

On January 13th my round-the-world plane ticket will expire and I am quite sure I wont be on that last plane back to Amsterdam. Until now I had a travel plan that I adjusted along the way and was basically already paid for before I left. But I want to know how it feels to be even more without aim or goal; to be ‘stuck’ somewhere on the planet without a ticket out of there and no idea of my next destination. It will become more important to sustain myself. It scares me and bothers me: I resent the tightness around the solar plexus that it gives me. I don’t want to be consumed with the idea of ‘how on earth will I make ends meet?’ At the same time: I would like to become good at it. The more countries in the world I ‘conquer’, the more places I can go back to. If I overcome this challenge I will enter a new level of freedom, I believe.

I believe in generosity. I like to share. I like to give. And I must say: it works. It really does. Many things ‘just happened’ quite unexpectedly during this trip and it seems to happen so often that I almost dare to rely on it. I slept on the floor only once and although the money is not coming in with shiploads and my cash flow is never consistent I am continuously taken care of and have always been able to eat and sleep and do things I like. But there is always an awareness of the virtual budget. I wish I would be more carefree.

In my ideal world everybody gives freely. I would give all my writing, coaching and training away for free and everybody who benefits from reading my posts or participating in my workshops would give as much as would make him or her feel really generous (instead of giving the least amount possible). So everybody would feel generous all the time, which is a really nice and uplifting feeling.

Greed and fear are my enemies. Generosity and courage are my friends. But the paradox is that it would take courage for me to really love money. I don’t yet see how to do it without falling into the trap of becoming a greedy bastard. I prefer to do such many good things that I will be rewarded without having to ask for it because I am ashamed of shamelessly chasing it. So I would like to harvest the fruits without doing the dirty work. It feels more heroic; my ego would love that. It’s not impossible either: I am pretty sure that Nelson Mandela never worried about his income. People wanted to reward him generously when they got the chance. And that suits me better: I find it hard to value myself and to put a price tag on what I do (although I am better at it than I used to be). To avoid that I rather do something not many other people dare to do and silently hope to be rewarded for it. Interesting how the ego twists and turns to keep its preferred self-image intact

There is something else that is holding me back. If my journey would turn into a huge financial success I fear that I would be considered to be an inspiring example for the wrong reasons. “That guy followed his heart and stuck to his principles of honesty, fearlessness and integrity and he got rich” As I write this sentence down I see that it wouldn’t be so bad. It might inspire greedy people to open their heart as a strategy to wealth. I guess it would be hard to become selfish again once the fortune is attained.

The more I think about it, the more it sounds like a good idea: I must learn to really love money. I must learn to see money as love. Not a clingy immature love but a selfless non-attached love. If I master that I would be able to create beautiful things, help many people on a bigger scale and live a very full life. It feels very good. Although I still find that there is something distasteful to super rich spiritual dudes like Deepak Choprah. But let’s worry about getting too rich later. Let’s first learn to love money.

The picture is taken in Hong Kong where I indeed was financial successful. Of course I had no intention whatsoever to post my rap video spoof pic but today it comes in handy. I must admit: I remember enjoying making the picture.