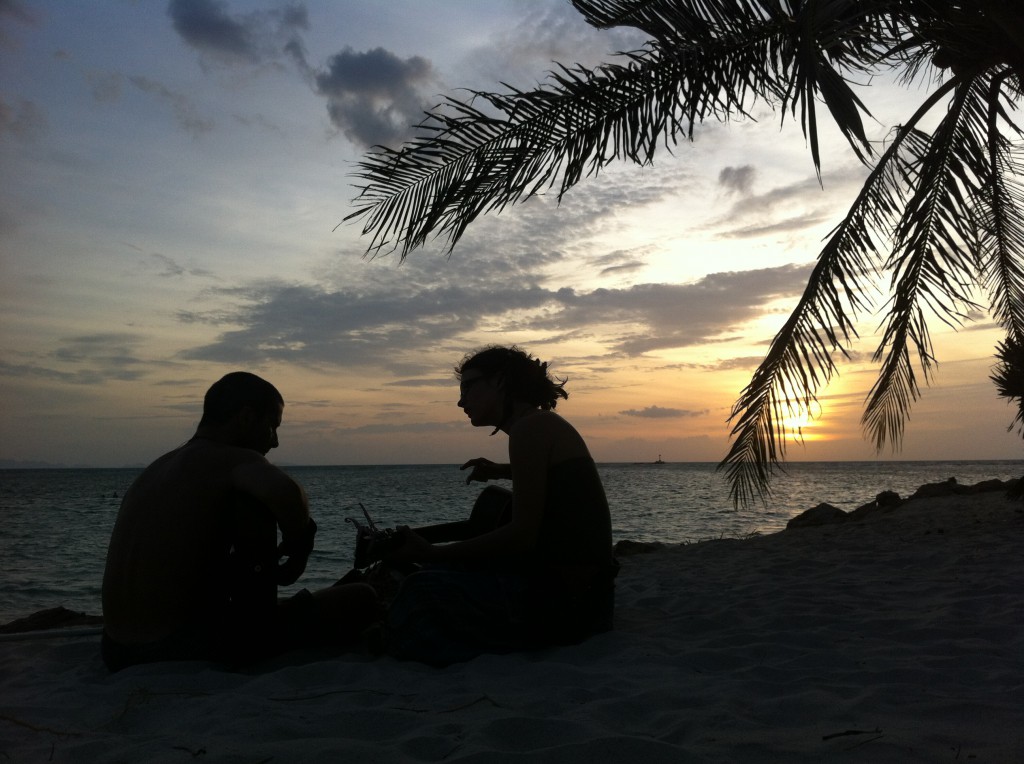 I am almost at the end of my visit to Thailand. The last few days I have been behaving like a tourist: seeing sites (read: beaches) and scootering around. Tomorrow I will go to a supposedly beautiful Nature Reserve Park and I hope to convince some yoga friends to skip school too since it will be my last day. This morning I went to class and I enjoyed it a lot more after having taken two days off. It is nice for a guy like me to become more flexible.

I feel good. The month in Thailand did not bring me what I wished or hoped for in terms of quantum leaps on my path towards Enlightenment or meeting with mind-blowing minds but I learned a valuable lesson that I am trying to integrate: to let go of expectations. And connected to that one: to let go of the idea or the fear that other people will judge me, will be disappointed in me and will stop liking me if I don’t live up to my self imposed expectations.

You have probably heard the saying that when you change everybody else changes. Or that when we live our truth we subconsciously give others permission to live theirs too: your honesty and vulnerability gives others the chance to make the shift. I know this to be true and I know that my writings will have that effect as long as I stay true to myself and to you. But it feels a bit embarrassing to say it so straightforward. I fear that you will think I am arrogant. To imply that I will allow you to change because I am hanging out on the beach in Thailand following my heart sounds a bit preposterous.

Nevertheless, it is one of nature’s laws. It really works that way and I am grateful for it. In the past I have written posts when I was terribly sad and heart broken and I found it very difficult to publish them. Months later they were published on The Good Men Project (they had a special edition on heart-break and well, I had plenty of material to submit). An American guy responded how timely my post came into his life and he thanked me for the insights he got from it. It feels like such a relief that even at times when I feel most miserable I can be of service to another soul just by being honest about it. To me this is true alchemy: being able to turn lead (a desperate moment) into gold (my desperation turns into something human and valuable by the act of sharing). And right now, in a month that did not seem that spectacular to me I am receiving proof that the laws still hold up. My decision to be less tough on myself and to go visit my brother touched a chord in some of you.

Twice last weeks a guy showed up in Koh Phangan to come visit me: once a guy from Hungary and the second time a guy from France who lived in Cambodia. Both have been following my blog for months and decided to make some big changes in their lives too. Both quit their jobs and have started their journey. A young Israeli guy whom I traveled with in India wrote me he came home changed. From now on truth is his motive and his mind is much calmer now. A young guy in India asked me how he should encounter his future. I asked him what his heart was telling him. He told me his heart told him that a good life is awaiting him but not in India. He is now gathering the courage to find a university in Europe.

All these things and many more would never have happened to me if my heart didn’t open in March 2004. When my old identity died because the structure collapsed under the pressure of my desperation a new one was revealed. I realized that I was whole and complete and I always have been. The self-image that I had created since childhood was not real. What was very, very clear to me was that I had no intention whatsoever to feed that false image any longer. The possible embarrassment, rejection and judgment I would encounter by revealing myself and speaking my newfound truth was far more appealing that continuing to live pretending I was a better version of me than I actually was.

After my spiritual awakening my life did not become easier. It was and is at times still painful, confusing, sad and tough. But it is a lot more honest and there is a very clear sense of direction. And the impact of my change on my world is spectacular and deeply gratifying. Most importantly: it is as real as it gets.

We are here on this planet to heal ourselves and others. We are here to do good. And it is not about a bit of healing here or there so we can move on in the way we used to or do just enough good to soothe our guilt: it is about giving everything we got. The more you heal, the more you become whole, the more you have to offer. Figuring out and even seeing and understanding how our life should be and could be is not enough. We have to live it.

This is to those who have found some truth but are disappointed because what they have found is not so pretty and for those who found that seeing through some delusion did not bring immediate happiness. Don’t give up. And like Miles Kessler taught me: no need to rush, no time to waste. Keep moving, gently but steady in the direction of truth.