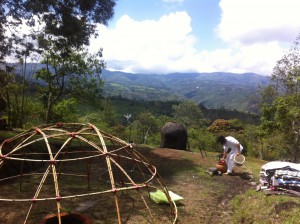 Ok, here we go again: down the same old.. elevator? And going down. Yesterday was my birthday and the first day of the retreat. Yesterday we started with a sweat lodge, this morning there was a Pi Urek water ceremony and we will do an ayahuasca ceremony in an hour from now. I feel the same incompetence I pretty much always feel in situations where sensitivity is involved. Everybody around me seems to see, feel or hear spirits, entities and healing forces. People break down crying out of gratitude or are so much in awe that they remain speechless for a while. To me it is just another rainy day in the Colombian mountains.

The point is that I have not a speck of trust that I will actually see something. And if I see something it might well turn out to be meaningless. Exactly 3 years ago I traveled to Colombia for the first time and I did 3 ayahuasca ceremonies. Ayahuasca is potion made from a vine found in the rain forest and used by shamans to help people heal, travel to the spirit world and receive visions. After 2 difficult ceremonies that contained of lots of vomiting and zero visions I had a 3rd ceremony that completely blew my mind. I saw my previous girlfriend delivering our baby and many other related and relevant things. It changed my mind radically. From being not so sure if she was ‘the one’ I became convinced that she was the right woman. I had no doubt anymore. I had seen the truth and it was beautiful. Well, it is 3 years later and it didn’t go exactly as how I thought it would go (live happily ever after). 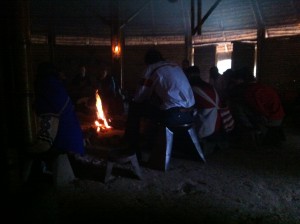 After that 3rd ceremony I did approximately 17 more and instead of initiating me to all her blissful secrets the plant didn’t give me any lasting insights anymore. Pretty much all of the ceremonies I did where just terribly difficult. In a way I am pissed off at the ayahuasca spirit and want to have a serious talk with her. But I am also very afraid of spending 12 days with blissed out people and feeling completely frustrated, not to mention spending nights with hours and hours of ongoing convulsing. I feel pretty stuck.

Why do I keep participating in ceremonies that are mostly awful? One answer is that I hoped to have changed last year. I hoped that a bit of yoga, some notion of chakra’s and the kundalini-rising experience in India would prepare me for the work we do here. Deep down I wish to make a quantum leap. But the first signs are not hopeful. The Kogi ceremony, the Inipi ceremony and the Pi Urek ceremony had the familiar effect on me: no effect at all.

If I didn’t have the spiritual breakthroughs that I had in my life I would not be able to keep this up. But I have first-hand experiences that sometimes something can happen and it can change a person forever. Sometimes a skin sheds. Transformation is our birthright and our obligation towards Creation. Of course it is more than awesome to find a key to a door you not even knew existed. I am trying to create the conditions for this to happen. But I am the first to admit it is hard on the mind, the ego and the body.

I have 2 main negative beliefs that stick to me like glue. “I am not good enough” and “I won’t succeed anyway”. More than anything I would like to be liberated from those. Let they forever be proven untrue.

So I did the first ayahuasca ceremony. And – as expected – nothing special happened. I drank only one cup of the brown, earthy liquid. I gave myself permission not to push myself. The result was that the vomiting was bearable but the journey uneventful.

Indeed other participants reported all kinds of amazing experiences and I have a very hard time to accept that I was at some quiet place while the other where at the party of the year. But the good thing is that I made peace with that.

Ok, I will be honest. It still sucks that I missed out on the special stuff. But I also realized during the ceremony that I am ruining my own night by kicking myself for being unable to find the entrance to the party. When I accepted the place where I was I had to admit it was a pretty peaceful place.

I spent the biggest part of the ceremony lying down on a mattress, in a dreamy state of half-sleep and I was the first one to go off to his real bed. That made that I felt quite rested today and indeed ‘purified’ or ‘cleansed’. Food tasted better and I felt comfortable and balanced.

What helped was that I chatted with one of the shamans and he told me that some people are more gifted in certain areas than others. He gave me the feeling that I was perfectly fine, even if the Universe doesn’t open up to me in ceremonies all the time. ‘The Creator all makes us uniquely different’ he said. Later that day he said in a talk that he blesses the spirit guides of people because he happens to be in touch with those guys and makes them (the spirit guides) feel good. It made me remember how many blessings I received this year from dozens of people from all religions and how many mind blowing experiences I already have under my belt. So I felt some simple inner peace. I shouldn’t really complain, should I?

In a previous post I talked about learning to love money. It is something to work on; I want to be rewarded but I don’t feel a hunger for money. I can also honestly say that I am generous with sharing insights, fears, feelings and resources. So I could justify the statement ‘I am not greedy’. But when I see how much I resent not receiving the ‘supreme’ experience during the ayahuasca ceremony I have reasons for concern. The amount of greed and anger I feel is not funny. If there was a way to steal or rob the experience from somebody I would probably do it.