I am starting to realize that the countries I choose to visit make it impossible not to think about conflict. Reading that sentence makes my laugh. How ignorant can a human being be? I went from Athens to Tel Aviv and from Amman to Beirut and after Beirut I will go to Baghdad via Cairo. I assume that all these places are in the current top 10 of sources of conflict. Still, I wasn’t looking for conflict; honestly, I was just letting myself be guided. Now that I’m already here I am trying to see what the message is that the Universe has for me.

Yesterday I did a bit of site seeing. I am not so good at site seeing. I don’t know what it is. Just looking at something for the sake of having seen it doesn’t fascinate me. But I like context and stories. Maybe it’s because I am not a visual person. Anyway, me and two other guys (one from Germany and one from Austria) went to see Mleeta yesterday and Tripoli the day before. Mleeta is a former Hezbollah stronghold now turned into an exhibition/ propaganda tool close to the border with Israel and Tripoli is predominantly Muslim city in the North. Meanwhile I have been reading “Inside Lebanon – Journey to a Shattered Land” with essays from Noam Chomsky.

In Tripoli we went into a mosque during prayer. I was invited to pray with them, which I did. I like to experience the ritual. First I had to wash myself in a traditional way (hands, underarms, face, nose, ears, mouth, feet) then I joined them during prayer, mimicking the movements. Afterwards an imam-looking guy (who turned out not to be an imam but we didn’t know until later) wanted to speak to us. Somebody else translated his words. I think that around 20 people stayed to hear what the guy had to say to us. Basically he gave a small talk, arguing why Islam was the highest truth, 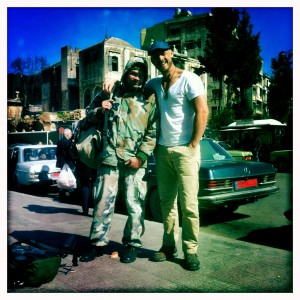 using a lot of rhetorical questions that didn’t leave a lot of room for a different point of view (“Do you agree that God created all things?”). What I felt was that he had the need to convince us of something he was convinced of himself. What was most striking to me was the similarity between the Chassidic Jews in Tsfat and this guy: similar clear eyes and similar strong convictions.

Later that day there was small incident that rubbed me the wrong way. We had met a soldier in the bus from Beirut. We got into a conversation because he could not understand we were not cold in the freezing weather. It was about 17-18 C, which is nice weather. After posing (and making clear we should pose in a manly way and not too gay) he offered to be our guide. We had a nice day and spoke about many things. Well, many things: he was mainly very open about his sexual conquers. At the end of the day we saw women completely covered in black veils, with only the eyes visible. We asked what he though about that and he said it was a good thing. “If she wants that, that is ok. We are Muslim”. So far, so good: I heard an element of freedom of choice. 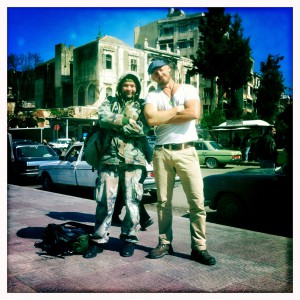 Then he pointed at some girls who where completely covered, head scarves, long trench coats, and said that that was not good. We thought he meant the girls were too covered. We misunderstood. The coats were relatively tight to the body, leaving a feminine silhouette. This was abject. For me it felt like the double standard was taken to the next level.

The next day we traveled to the Hezbollah exhibition in the South which tells the story of the brave resistance: who where able to stop the enemy (Israel) with almost bare hands. Meanwhile I am reading the aforementioned book. Noam Chomsky is a very intelligent and eloquent expert on US foreign policies and on power in general. He visited Lebanon in May 2006. The authors wanted to make a book around his visit. What they didn’t know was that Israel would invade Lebanon in summer. The concept of the book changed, now they added eyewitness accounts of bloggers that wrote daily during the war.

What I am learning is that war is terrible. And that I might not agree with certain views and perspectives on women’s rights, freedom of speech, and vengeful thinking, this doesn’t mean that for those people it is less painful if their houses are bombed or their children, friends or family members are killed. What was downplayed in the Western media as a conflict between Hezbollah and Israel was experienced here in Lebanon as a complete and total war.

In Holland we have a right wing party that is quite popular now because of it’s anti-Islamic rhetoric: the LPF. Imagine Belgium being very afraid of this party and imagine Belgium being completely supported and heavily armed by the USA. For historical reasons Belgium has the gained the right to ‘defend itself’. It is very understandable from a Belgian perspective that they are cautious. But then, one day, they decide that the LPF has gone too far and they bomb Holland “20 years back in time” as one of the Belgian generals would claim. We can’t do anything because Belgium is backed by the USA. Now would the average moderate Dutch citizen feel happy because the infrastructure of his country is totally destroyed and many people are killed to eliminate a political party that he has no love together with the poor segment of the Dutch population that feels heard by this party and therefore support it? Or would he feel a victim of a cruel and sick game of power? 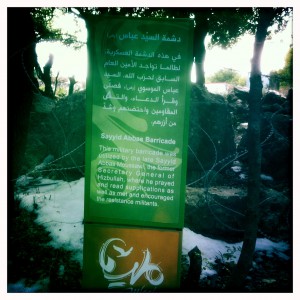 I become aware that I have been buying into the paradigm that was presented to me in the media I am exposed to: the Western media. I also become aware that I am not buying into the Hezbollah propaganda because it is less subtle and less ‘my’ language. Which implies that the Western propaganda is working, at least it worked on me. I also become aware of how little I cared. When ‘infrastructure’ is bombed at the other side of the world for what seems to be a valid reason I shrug my shoulders. It sounds abstract and nobody got hurt right? But what if the Belgians bombed all the roads, the airport, the railroads, the bridges and the tunnels in Holland? Clients could not visit; I would be without work, therefore no income. There would be no supplying of stores, no food, no electricity, no water. Visiting friends, family or others would become impossible or dangerous.

I am meeting people of my age and younger who lived through this. People like my friends and me: creatives, entrepreneurs, people working in advertising, media and fashion. And yes, it wounded them all. Even if they are educated, friendly, liberal, open-minded, Christian, Muslim or non-religious, sensible and forgiving people: they have scars.

I often feel overwhelmed by the magnitude of human ignorance and it’s devastating effects. I went on this journey to find those who make a difference and to try to make a contribution myself. Over and over again I am confronted with the futility of my attempt. I can’t do much more than bear witness.