I am in Iraq. It is not a walk in the park. But I feel good right now, I feel trust and I feel strength. 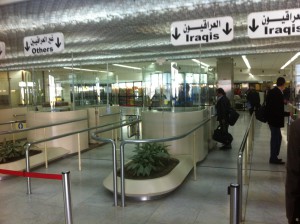 I arrived last Saturday. After landing non-Iraqi passengers had to go pass immigration to buy a visa. I had already obtained a visa from the Iraqi Embassy in The Netherlands so I expected an easy passage. This was not the case. It is weird to be kept waiting outside an open door where you can see that inside nothing is happening. I could see all of them taking turns looking at my passport. Other passengers came and left and after a while I was the only one who was still waiting. During this time I am contemplating what to do. Should I be completely Zen about it and just read and go into a patience contest with them? Or should I start puffing myself up and pretend to be somebody really important? After all, I am the only white guy on the airport.

It feels slightly intimidating when the immigration officer whistles through his teeth as a sign of being impressed when you correct him; you are staying 3 weeks and not 3 days, as he understood. I felt a wave of doubt going through my system and my knees weakened for a moment. Was this really a good idea? 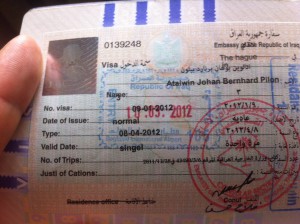 After an hour I am called inside the office. There is a ‘problem’ with my visa and they keep pointing at the little numbers after “No. of trips” (which is the date of application but I only saw that now). Actually their problem is that my visa is completely legit and they can’t get make me pay for a visa that I already paid for. So now they say I can’t stay for 3 weeks but maximum for 10 days. First I tell them I have to work for 2 weeks and that ten days is not enough. They are not impressed. Then I go in ‘fuck you’ mode and tell them it is fine. I come to help their country, a country that has more than enough problems, I come to train young Iraqi’s to create a better future and if they want to screw that up, fine with me. I don’t know if I impressed them or that they gave up but they stamped my passport and I could go. Now I am in the arrival hall of a completely empty airport.

The president of the NGO that I will work for was waiting for me outside. What wasn’t clear was that outside meant outside the premises of the airport which is a 20 min and $50,- taxi ride. I can tell you it feels a bit scary when you enter an unsafe place where people are kidnapped and a taxi starts speeding and you don’t know where he is going. The taxi driver tells me not to worry. I am shifting between surrender and combat mode.

Iraq is a war zone and simple things are not simple anymore. When I changed cars at the checkpoint and met the people who were picking me up I asked if I could go to the bathroom when we were at a gas station. After some discussion between the president and the driver they decided I had to wait until the hotel.

My hotel is in the Red Zone but in a relatively secure area. The Green Zone is where all the embassy’s and expats are. I am hanging with the Iraqi’s. 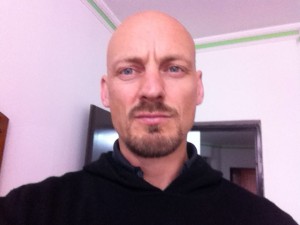 In my room I get a briefing. Although I am obviously a foreigner I should try to look as integrated as possible. I should not wear the torn jeans I am wearing. Also I was wearing a T-shirt with something that could be seen as a red cross. Don’t wear it. And I should shave my beard and leave a goatee. We have a little fashion parade in my room, going through the clothes that would raise minimal suspicion.

There is one street where I can walk till a certain point, and then I have to return. The good thing about this is that the chances that I get lost are not so big. I am born without a sense of direction, you see. One of the first things I see is a man being beaten up by six cops. My guide tells me not to look and keep walking.

Yesterday I went out alone, for the first time. I took courage. It was dark and I was the only pedestrian. I realized that many of the drivers are traumatized and it just would take one of them to snap and take his frustration out on an unarmed white guy who looked like the US Marine who shot his brother. I realize that really the only thing that carries me is trust. But I also feel that I really want to live and that all the heroic death phantasies I might have entertained in the plane the day before are now out of the window.

I deliberately went to the same grocery story and the same grilled chicken salesman so they would know my face. Finally, for the first time in 24 hours I meet some friendliness. Although there is a language barrier we shake hands, introduce ourselves and give low fives. The chicken salesman teaches me some Arabic words. I am sure I will eat plenty of chicken coming weeks.

Today I meditated in my room and worked on my laptop. I have wifi in my room if I sit close to the door. I was wondering if the people of the NGO would show up because they were supposed to come on Sunday but nobody came. I would start to create a plan B if nobody would show up today. Then, when I didn’t expect it, the director rang my doorbell. He took me out for lunch. There I met my interpreter. From the moment I met that guy I felt new energy and hope entering my body. His English is not perfect but he is motivated and inspired.

The plan is to train two groups of young Iraqi’s. There will be 20 participants per group. We will train each group for 5 days.

The challenge is so big that it overwhelms me. I have no clue how to work with people who are separated from me by language, tradition and religion. I have no clue how to bring them together, how to be able to hear them and how to give them the feeling they are heard. But I will try and they will notice that I am trying and every centimeter of terrain that we cover is gain.

For a moment I felt completely vulnerable and surrendered to destiny. I messaged a friend and I broke down. I didn’t feel received so I fell deeper. And then I worked myself through. I should not seek for comfort, support or approval outside myself. I am alone but I am not.