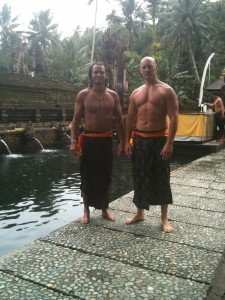 On our way out we saw people getting into the ponds. Mike decided immediately to do the same. I was a bit reluctant, not wanting to something unrespectful on holy ground. Mentioning that a boardshort was not appropriate attire wasn’t holding him back. He rushed to a souvernir shop and bought two pieces of fabric that should serve as sarongs. Right before we were about to drop our pants near the pond we were addressed by a friendly young man. He politely asked us if we had the intention to go in the water.

The young man explained to us that it was ok to go in the water but we had to pray (“to your own God”) before we entered. And we had to change clothes somewhere else. Also he showed us where we could borrow the sarongs that were “much better”. Great way of politely preventing us from doing something stupid i.e. entering holy water with a womens scarve tied around our asses.

Within minutes the whole situation had changed again. First we were disappointed about our  unfulfilling visit and were hoping for at least a refreshing plunge in the water, now we are getting ready for praying and meditating. Sincerity and seriousness came over us as we walked towards the ponds in traditional costumes. A kind bodybuilder we met in the locker room (shorter than Mike, bigger arms than me) guided us with gestures through the ceremonial rites.

In the back wall of the pond is a fairly long row of fountains. We move with the people move from left to right, praying before each fountain and then splashing water in our faces, followed by splashing water over our bodies. Then we kneel and let the water splash over the tops of our heads while moving our hands as if we run our hands through our hair. Then we stand up again and splash some more water in the face. When done the whole ritual is repeated at the next fountain,  a meter and a half to the right.

Participating in this holy ritual was already quite amazing. But what was truly miraculous was the peace and quiet that came over both of us. As Mike said: “the water grounds you immediately”. I don’t often speak or write about the esoteric or transcendant because I don’t fully understand it. But I have learned to accept that there are many things that are beyond my comprehension (which was – by the way – a major shift, coming from the position of being very much identified with being intelligent and smart). There was something special about this pond, something truly sacred and holy. Both of us felt as if we had just spent a week in meditation, a blissful feeling that stayed with us the whole day. And I’m not exaggerating this time.

Only afterwards we learned about the significance, through our experience and by receiving information from the people and the internet. The temple is more than a thousand years old. It is hard to imagine how many devoted people went before us. Every fountain has a specific healing energy, supposedly connected to the chacra’s. Only thing that I know is that we will go back and take a bit more time than yesterday, going for a final cleansing before we leave Ubud. 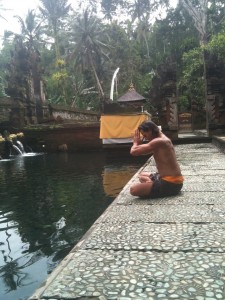 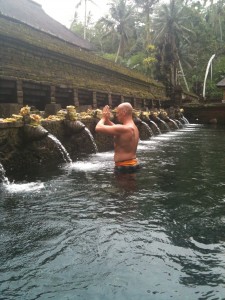 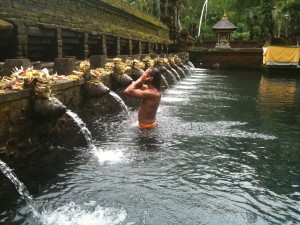