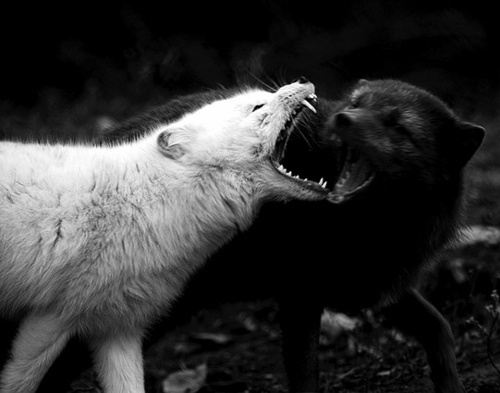 There is a story I like to tell to my clients, participants and friends. It’s about a wise, old Cherokee Indian. Because I felt like writing about it I just did some Google research and I realized that I unconsciously changed the story slightly. Which is nice, I guess. It means that the story is alive. I also found that there is a second chapter but let me start with the beginning.

A group of Cherokee children has gathered around their grandfather. They are filled with excitement and curiousity. That day there had been a quite tumultuous conflict between two adults and their grandfather was called to mediate. The children are eager to hear what he has to say about it.

One of the children pops the question that puzzles him. “Grandfather, why do people fight?”. “Well” the old man replies “we all have two wolves inside us, you see. They are in our chest. And these wolves are constantly fighting each other”. The eyes of the children have grown big by now. “In our chests too, grandfather?” asks another child. “And in your chest too?” asks a third one. He nods, “yes, in my chest too”. He surely has their attention now. Grandfather continues. “There is a white wolf and a black wolf. The black wolf is filled with fear, anger, envy, jealousy, greed, and arrogance. The white wolf is filled with peace, love, hope, courage, humility, compassion, and faith. They battle constantly”. Then he stops. It’s the child that asked the initial question that can’t handle the tension anymore. “But grandfather, which wolf wins?”. The old Cherokee simply replies, “the one that we feed”.

Nice story, isn’t it? It is not so hard to resonate with the “feeding” of anger, jealousy, envy and greed. These emotions can really have power over us and we can see how we keep fueling them and feel how hard it is to “snap out of it”. What also sounds pretty convincing and hopeful is the idea that we have a choice. We can stop feeding the black wolf and start feeding the white wolf at any given moment. It’s the whole spiritual path, or the path to happines and fulfilment in a nutshell. And I don’t know about you but the third thing that definately speaks to me is that it’s a never ending battle. Not that I like it but I surely resonate with it.

Stop feeding the black wolf. Feed the white wolf. It’s that simple. But it ain’t easy.

When hearing this story many people realize how utterly and completely their world is dominated by the black wolf. We are driven by greed and fear, our economy is based on the idea of scarsity and in order to survive the black wolf will go far to obtain the biggest part of the pie he can get.

Fact is that most of us have a very underdeveloped white wolf. Makes sense, it was hardly fed. The white wolf is weak, skinny and small. “If I show my white wolf at work, it will be murdered within seconds” is a common reply from executives I coach. “There is no place for the white wolf in our company”, they say. And of course, I believe them, in the sense that I can see that the vast majority of businesses and corparations are completely run by black wolves.

But I found out something really cool about the white wolf. Where the shoulder height of the black wolf can reach a maximum of 32-34 inches (80-85 cm), the white wolf can grow into the size of a horse. When a well developed white wolf enters a room filled with back wolves something changes. The underdeveloped white wolves realize they are potentially a lot stronger than their black bullies. All of a sudden they got back-up. And every strong white wolf will back his weaker brothers and sisters up. Always.

The black wolf is primarily self-serving and mainly interested in staying ahead of the other wolves at any cost. He is the survivor. The white wolf is interested in the development and empowerment of all his white brothers and sisters and sees himself as a mere vehicle to spread loving kindness. He is led by his cause. It doesn’t feel like a choice or an obligation, he just surrenders to the call of this life force. It just feels natural.

It’s tough to get your inner white wolf healthy with a strong and cunning black wolf around that is eager to steal as much food as possible. But please be perseverent. Then one day you will notice that the white wolf has become equally strong. That is the tipping point. Allthough the battle continues the white wolf wins more and more fights and keeps getting stronger. Like Neo in The Matrix.

Contrary to the way black wolves relate a white wolf never has to be afraid when he meets a stronger white wolf. They are natural allies. So the best thing you can do is first start feeding the white wolf sneakily; do a meditation course. Meanwhile look around carefully and find the biggest white wolf around. Learn. Practice. Read. Study the black wolf. Stop being his bitch. Start winning.