Could it be that this pattern, which is probaby alive in many of us, is at the root of all the troubles that are going on? I’m just thinking out loud now. Ain’t it ridiculous that I write on the internet regularly but that I haven’t really told you or other people with whom I share my spiritual training? I’m open to everybody except to the people who also practice openness. I’m affraid to speak my mind when there are many mindful people around. When I look at this it is not that I feel my Dharma brothers and sisters are unkind, it is the fear of my shadow being reveiled to myself by their assumed wisdom. So here we have it: even though I’m in the practice of looking at myself, when push comes to shove I rather have myself not exposed, and certainly not unexpectedly. I secretly prefer to hold on to the image of being a pretty wise guy (and have control over the moments where I reveal myself).

I received Jukai from you in january 2008, the 18th to be exactly. It was my public ‘coming out’ as a formal practitioner of Zen Buddhism in the lineage of Maezumi roshi and you. Deep down we are all Buddhists, we all have Buddha nature, we just need to come out of the closet. Not only was this how you phrased it, it was really what the experience was like for me.

“In the Three Pure precepts, we vow that we are not going to do evil, bad, or horrible things. In these Precepts, we are saying, “To the best of my ability, to the best of my capacity, I will avoid or refrain from doing anything that is hurtful or harmful to others. Secondly, I vow to do good. This means that I vow to do good for other people, and also for other things, whether it be animals, dogs, cats, or other creatures, whether it be inanimate objects, stones, the earth and so forth.” We vow to always do good, which means to do what we know to be the best thing. And third, and most importantly, is the bodhisattva vow, which is to put your own enlightenment on hold, on the back burner, and to work endlessly and tirelessly, and sometimes through exhaustion, to bring about the awakening of all sentient beings. ” 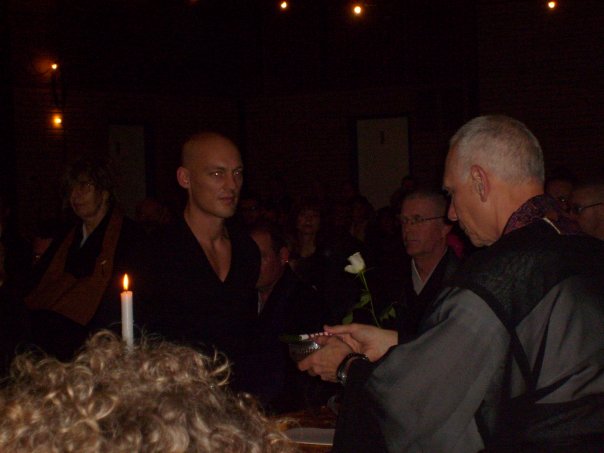 Today I want to be truly straight with you, more straight than I ever dared to be. The bottom line of my plea is: I hope you will truly suffer from this painful episode and that nobody will suffer more than you. I feel (or fear) that the only way to come down from your pedestal is by come crashing down yourself. Too many people want you to stay up there and will admire you for being ‘courageous’, ‘open’ and ‘vulnerable’. I believe that admiration is blinding for the admirors and deluding for the admired one. You are not appreciated for what you are but for what they see in you. You have to bridge that gap yourself, that’s the toll for being that advanced on your path.

When giving a talk or a workshop you are the most lovable guy, funny, wise and warm. But the second the workshop is over you shift to distant, unavailable, not seeming to give a shit about anything or anyone. I can imagine that someone who is always surrounded by needy people needs to protect himself and needs to create some space for himself. But I can also imagine that something that started as an expression of a heartfelt human need for space becomes an unhealthy mechanism, damaging self and others.

Also I feel I should mention your tendency to publicly humiliate your students during workshops. Even though I understand the usefulness of crashing down on one’s ego – and yeah, it is very Zen – I feel it contributes to an atmosphere of not only love and compassion but adds subtle amounts of divisiveness, fear and hypocrisy. I can vividly remember the sheepish laughter of the crowd in Ameland when you made a ‘joke’: you told me to ‘spare us (the group) the agony’ when I wanted to ask how to deal with my dying father. Even though I believe you only do it to people who can take a hit and even though I fully admit that some hits I received struck home and woke me up (thank you) I feel that humiliation does more damage than good. Especially when the Humiliator is also the Facilitator, Master, Compassionate One and Admired One. I have humiliated lots of people and not out of compassion but out of need of feeling superior. I feel lots of regrets. I feel I kept myself wounded by humiliating others and that I did it out of old personal woundedness.

Finally, there was something in your announcement to disrobe that gave me an eiry, uneasy feeling. As if the humble gesture to disrobe was actually not a sacrifice but an escape out of the Soto school, and that the scandal was used as an opportunity to finally ‘go commercial’ with Big Mind (‘To go Oprah’ as someone put it). To be honest, this is what your announcement sounded like to me: “with deep sadness I announce that I have chosen to abort my dysfunctional marriage and leave not only the ever-demanding Sangha but the entire restraining Soto school to go to Hawaii to do what I love and make tons of money in the process, from now on without any guilt or shame”. Of course there is nothing wrong with liberating ourselves, and I also truly believe that it is very tough to let go of your priest identity and your marriage, even when it was often difficult. But the ‘reward’ for this step sounds so huge that the deep sadness might in fact turn out less deep than necessary and – again this word – hypocrisy creeps in. So if you were less than truly straight in your announcement I hope you suffer from it. I just wish you plenty of time and space for profound, existential sadness instead of a swift and successful regaining of your posture.

For me Trungpa Rinpoche is an inspiring guy. His books on warriorship appeal to me. I like the choice: you either live like a warrior or like a coward. When you want to own your responsibility I feel it is also wise to own the Coward. Falling in love with a student is one thing, not having the balls to tell your wife is another. Hiding behind a false superior image is just cowardly behaviour and I don’t have to tell you how much suffering it causes.

Having said all this I looked at the precepts today and even while I care about them deeply I realize I broke most of them, if not all. So I’m not any better than you. I also failed in a relationship recently and even though I blame myself it wasn’t entirely my fault. Likewise I believe that the women in your life carry responsibility as well, nobody is innocent. And even though this post isn’t meant to put more feathers up your ass (if that isn’t an expression in the US you will catch my drift) I cannot say that my experience of the Jukai ceremony or any other experience has become less true or less valuable to me. Without you and without the Big Mind Process my life would have looked different and Basic Goodness wouldn’t exist. I’m eternally grateful for that. Actually, I have started to appreciate the fact that a flawed human being – who fucks up just like I do and may be even worse – has the capacity to simultaneously be a very gifted and skillful guide in the process of human and/ or spiritual growth and can conduct beautiful, mystic and powerful ceremonies. We are truly nothing special and there is no need to be. That feels quite liberating.

So dear Roshi, I wish you immense pain, sadness and suffering. I wish you everything necessary to shed the roshi-armor and own the Coward, a long and intense Falling From Grace. I wish you overwhelming loneliness and deep despair. I wish you more than you can take. And who knows, my prayers might be heard. Then Genpo Merzel will go through the last fase of his life as a truly humble man. I hope so, for you, your family and loved ones and all the others who care about you and you care about. Hell, I wish this for all sentient beings. Take care, Genpo. See you on the human side.

PS: You complained about not receiving long emails from me anymore? I hope these 1651 words make up for something.