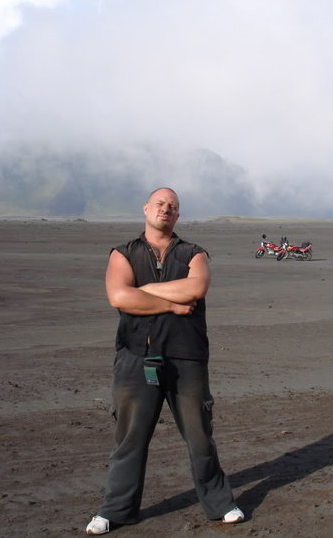 Today is the last whole day that I will be spending in Bali. Tomorrow we will fly back to Amsterdam. It is kind of a strange feeling. At least, that is what I think I feel. It is also very early morning and I’m typing in the open living room of my brothers pool villa in Seminyak. I’m not sure why I couldn’t sleep. Was it the airco, was it because I’m nervous about going home or having to find more participants for my upcoming mindfulness courses or have I gotten used to waking up around sunrise? Who knows?

Anyway, it is nice to see my brother again and seeing that he is quite happy. He has been living here for five years already and the reason why I didn’t see him earlier was because he went to Thailand just before I travelled to Bali. So we meet now, and that is also good. We had the talk we needed to have.

My brother and I didn’t have the easiest childhood in the world and I feel he always drew a shorter end of the stick than me. Because of an absent father we had only one parent and she was working full time. There was a lot of competing for love and attention going on as the physical and emotional presence of our mother was scarse, in the economical sense of the word. We also had a battle about hierarchy. We were treated equally – for reasons of convenience I guess – and since I was older that didn’t feel fair to me. I wasn’t allowed to be the older brother. So when adults weren’t watching I immediately made sure he knew I was the stronger one. I used to beat him up a lot. A third factor was the ever present shadow of our father that colored my idea of who I was. I grew up with the idea that my father was bad. He was a loser, a liar, a thief, extremely selfish, cold, arrogant, without love or empathy, enjoyed humiliating people and had wounded my mum. This was what I heard. To my surprise my brother had a different memory. He had never heard a bad word about my father until he got 7. That was the year where he got caught for doing something ‘wrong’ and was ‘diagnosed’ with a case of inhereting the genes of my father by the family. In the play of our family life he got cast as The Problem Child where I took on the role The Good Kid, as I was terrified to become like my father. I tried hard to be exactly the opposite of my father were my brother might have given up trying to be confirmed as being good very early in his life, since he was already marked.

Yesterday my brother told me he never felt as if he had a brother, or that he never felt that I was a brother for him. As I write all this down, for the first time drawing the complete picture for myself, I feel we never had a chance. I’m naming now three major influences that drove us apart but I can think of more. It breaks my heart when I oversee all the suffering we went through and I can only imagine how lonely and rejected my little brother must have felt during his childhood, often alone in his room.

I wish I could just turn back the clock and do it all over again. I wish I could make all the beatings and humiliations undone. But I can’t. I regret that from the bottom of my soul. It is very tough for me to see how tough my brother has become. I feel very guilty and intense grief. I sob behind my laptop.

It is tough to see and acknowledge the destruction we caused. It is easier to stay in denial. And when we see the destruction and feel the guilt and shame around it, it is hard to balance it. Even though I’m responsible for my actions I was also a child and even although it feels that way I wasn’t 100% responsible. There have been moments where I felt I had forgiven myself but the guilt comes back. And even though my brother has said he has forgiven me I feel we are both still wounded.

My brother expressed his feeling of never having a brother during childhood. He made me realize that I feel the same and that I missed that too. I realize that the last 20 years I have been trying to make up for what I did. Not to free myself from guilt but to finally retrieve the brother I lost early along our way. I need him back, I hope I’ll find him.

Dear Ries, would you please allow me to be your big brother? Please give me a chance, I will do my best. And I hope you want to be my little brother, even though you are bigger than me now (but still not taller) and can kick my ass. Would you? Maybe we can make our relationship into a very cool one during the second half of our lives. I certainly hope so.

I would like to end by saying I am very proud of you and see that you are a very good Thai boxing trainer and trust that you will become an inspiration to many. I look forward to receive training from you soon.