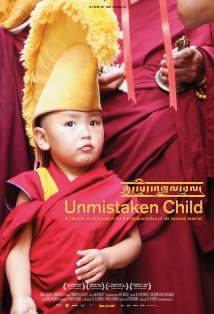 Tenzin sets off on this unforgettable quest on foot, mule and even helicopter, through breathtaking landscapes and remote traditional Tibetan villages. Along the way, Tenzin listens to stories about young children with special characteristics, and performs rarely seen ritualistic tests designed to determine the likelihood of reincarnation. He eventually presents the child he believes to be his reincarnated master to the Dalai Lama so that he can make the final decision.

‘Unmistaken Child’ gives us a peek into a world that is hard to understand but at the the same time inspiring and convincing. The anecdotes about Lama Konchog blow me away. He spend 26 years in solitary retreat. TWENTY SIX YEARS! You can imagine what this does to any pride I might have carried around the approximately 50 weeks of non-solitary retreat I’ve done so far. Watching this movie and allowing it to penetrate you makes you drop preconceived concepts and ideas. I recommend it!